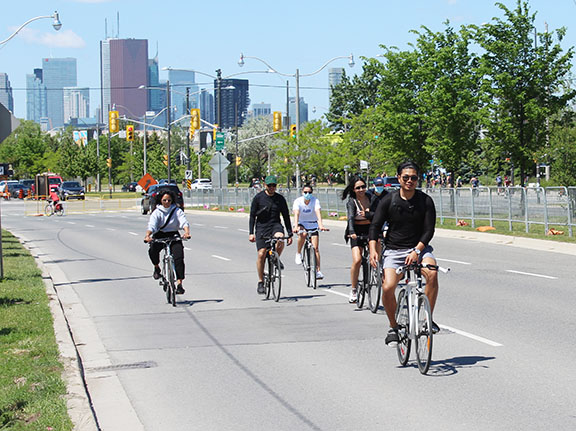 The weekend closures of portions of some major roads so people can enjoy more public space for cycling, rollerblading, jogging and walking has proven to be extremely popular with Toronto residents.

According to City of Toronto statistics from the weekend of May 23, thousands of people took advantage of the extra space provided by the ActiveTO program to get some exercise outdoors.

That is expected to be the case again this Saturday and Sunday (June 20 and 21 respectively) as Toronto welcomes the first weekend of summer.

Locally, the eastbound lanes of Lake Shore Boulevard East will once again be closed between Leslie Street and Kew Beach Avenue from 6 a.m. on June 20 to 11 p.m. on June 21.

Also closed this weekend will be Lake Shore Boulevard West (from Windermere Avenue to Stadium Road), and Bayview Avenue from Front Street to Rosedale Valley Boulevard, and River Street from Gerrard Street East to Bayview Avenue. The closures have made more than 10 kilometres of roadway normally given to cars open for other uses on the weekend including cycling, jogging and rollerblading while observing COVID-19 safety protocols.

In a survey released earlier this week, the City of Toronto said that on Saturday, May 23, between 11 a.m. and 7 p.m. approximately 5,000 people on bikes and 5,400 pedestrians were counted using the closed eastbound lanes of Lake Shore Boulevard East between Coxwell and Kew Beach avenues.

The closure of the Lake Shore Boulevard East lanes was extended west to Leslie Street on the weekend of June 6.

Part of ActiveTO is also the Quiet Streets program which limits a number of neighbourhood streets to local traffic only in order to provide more space for people to safely take part in outdoor activities.

In East Toronto, the following areas have been designated as Quiet Streets:

For more information on the city’s ActiveTO program, visit https://www.toronto.ca/home/covid-19/covid-19-protect-yourself-others/covid-19-reduce-virus-spread/covid-19-activeto/