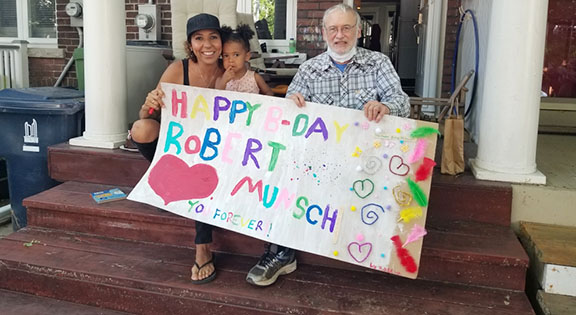 Robert Munsch is joined by his daughter Julie and granddaughter Xave for a surprise 75th birthday party in the Beach on June 11. Inset photo, Paper Bag Princesses Ariana, standing, Tessa and mom Charryse attend the party on Lee Avenue. Photos by Shah Ruby.

On Thursday June 11, a number of Beach residents had gathered (while maintaining social distancing) on Lee Avenue just after 5 p.m. in anticipation of wishing Munsch a Happy Birthday!

Munsch’s daughter Julie, with her toddler Xave, led her father out of her house on Lee Avenue for his birthday surprise: a gathering of local families present to celebrate with him.

The look on his face revealed sheer joy. His eyes, wide and kind, took in the scene ahead, which was filled with memorabilia, colourful party hats, hand-painted birthday signs and a few little girls adorned as Paper Bag Princesses, a character from one of Munsch’s most famous books.

The birthday anthem was sung and words of admiration were shared with Munsch. To make things even more memorable, Julie then did a reading of the well-known book Mortimer while the crowd enthusiastically chanted the ‘clang, clang’ part. “It was such a touching experience to have multiple generations gather during this time of unusual isolation, to celebrate someone whose stories make us nostalgic for our childhoods and create such strong bonds with our own kids.” Ruth Kalnitsky Roth said after the celebration.

“It was so heartwarming to see that moment between him and his daughter and granddaughter – and to get a glimpse into the inspiration behind these stories that we have all loved for years.” Kat Ash said.

Julie Munsch said she was thrilled to have been able to give the surprise party for her dad, who lives in Guelph.

“It has been 10 years since my father has toured or told stories to groups of children, and he misses it. I also love him to death and thought it would be a special experience for him,” said Julie.

Given everything that has been going on lately, she said the timing of the party made it extra special.

“My parents were originally American and have now spent half of their lives in the U.S. and in Canada. My siblings and I were adopted here and two of us are mixed race, black and white,” said Julie. “I find it commendable that they moved from the States because they didn’t want to raise children in the U.S., and that was before they knew they’d end up adopting children of colour. They had the sense to get out early.”

“[What I admire most about my dad is] his humility, as well as his desire for a simple existence,” she added. “He doesn’t find value in materialism, he doesn’t have a big house, expensive cars etc… It’s admirable, to be truly happy for who you are as a person, without materialistic trappings.”

Julie moved to the Beach neighbourhood in 2017 when she was pregnant with her daughter. She loves the natural beauty, the countless families and friendly community that the neighbourhood offers.

Julie said she believes that the community will be a good place for her daughter to grow up. Xave is the first grandchild in the Canadian Munsch clan and their first true Munschkin!