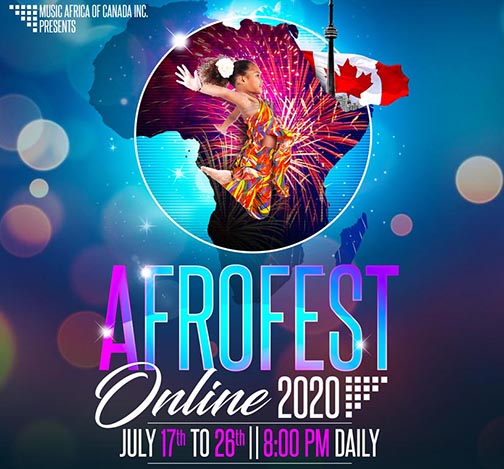 Afrofest, which has been taking place in Woodbine Park since 2012, will holding an online festival this July due to COVID-19 restrictions.

This year, more than many others in the past, the Afrofest celebration that has been taking place in early July in Woodbine Park every year since 2012 would have been especially important.

However, like other large events and festivals planned for this summer, it had to be cancelled due to the COVID-19 pandemic.

It will still take place as a virtual celebration in July, but Afrofest’s executive director Peter Toh wishes the huge gathering of visitors, musicians, artisans and vendors could have happened in person this year.

“It’s hard. Especially with everything that is going on right now in our community, this would have been a great time for everybody to come together,” he told Beach Metro News.

The issues of racial inequality and police treatment of the Black community in not just the United States but internationally has come to the forefront this spring with protests against systemic racism taking place all around the world.

Afrofest, which is the largest free African music festival in North America, would have been a great opportunity to celebrate and help heal on the weekend of July 4 and 5 at Woodbine Park.

However, it was not to be as large gatherings at public events have been banned by the City of Toronto for this summer.

Afrofest will still take place next month but it will now be a virtual celebration from July 17 to 26, said Toh.

He said organizers are basically trying to fit a weekend of music and celebration into an online event, and decided that spreading it out over nine nights was the best approach.

“We know it is impossible to ask people to sit by their computer for 16 hours over a weekend, so we are spreading it out over 10 days for one to two hours a night from July 17 to 26.”

There will be nightly online performances or posted content.

“We are accepting applications from those who want to perform from home. We can also provide a studio for people to do a show from.”

Afrofest is now accepting applications from artists who wish to take part in the virtual celebrations and will decide around June 15- 17 on a lineup. Once that has been finalized, it will be posted on the Afrofest website at www.afrofest.ca

This would have been the 31st annual Afrofest.

The first one took place at the former Bamboo Club before branching out to Queen’s Park in 1990. In 2000, Afrofest changed its format and became a two-day festival held Saturday to Sunday at Queen’s Park, before making Woodbine Park its home in 2012.

Toh said that as Afrofest has grown in popularity, so has the number of people attending and it’s possible that this year’s event would have been the last one to be held at Woodbine Park as the festival is in need of a larger venue in the future.

“It is a beautiful location but it has its challenges because of its size,” Toh said of Woodbine Park. “We were told by the city last year that we are too big now for it and have basically outgrown it. We are working on a strategy on what can we do in the future.”

Larger sites such as Downsview Park and Toronto islands have been suggested as they can take much bigger crowds. Downsview also has more on-site parking.

Parking has been the one complaint from Beach area residents over the past couple years as Afrofest has become more and more popular.

Toh said the festival has enjoyed being in Woodbine Park.

“Woodbine has been a great venue and the community is great, and has always been very positive.”

He said he would prefer Downsview Park for 2021.

“I know my community might not want to go to the island. Downsview Park would be better and there is more parking.”