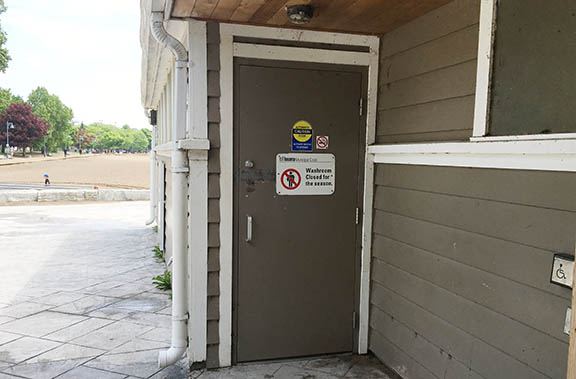 The washrooms at the Woodbine Bathing Station are not expected to be reopened until later this month.

Heading into the first weekend in June, the City of Toronto is starting to open up public washrooms in local parks.

On June 1, the city announced it would begin the process of opening up park washrooms and was aiming to have approximately 50 facilities open by Saturday, June 6, with the rest reopening by the middle of this month.

First on the list to reopen were washrooms in parks in higher density urban areas since they get more traffic.

Locally, those included a pair of parks in the Toronto-Danforth ward: Riverdale East and Withrow Park.

Also, though they were not originally slated to re-open until after this weekend, the washrooms in Kew Gardens and Pantry Park will be open by June 6.

Beaches-East York Councillor Brad Bradford told Beach Metro News that he has been hearing from residents who are frustrated that all of the washrooms in the parks along the Boardwalk have not yet been reopened.

“I’ve been hearing from the community about wanting to see the washrooms reopen and I am keen to see them come back online too – especially as the weather gets better and the parks and the beach get busier,” he said.

He said the city is prioritizing the openings depending on density needs and the ability of work crews to get them reopened.

“We do have to reopen them safely,” said Bradford of the park washrooms. “We have to roll out new signage about distancing, put extra protocols in place around cleaning, and make sure the washrooms can be managed properly.”

The city’s announcement on the reopening outlined some of the safety measures and protocols for the washrooms in parks.

“Toronto Public Health (TPH) has provided recommendations for cleaning of washroom which includes a deep clean, once a week, at all sites. TPH has also advised that water fountains and bottle filling stations at these sites may also open with daily cleaning and disinfection. The City is committed to meeting these recommendations and park washrooms (including attached drinking fountains and water bottle filling stations) will be cleaned a minimum of two times per day with one deep cleaning per week,” the announcement said.

“Residents using park washrooms should maintain a distance of two metres or six feet from others at all times while waiting in line, and should wash hands or use hand sanitizer. It is also recommended that cloth face coverings are worn, especially when physical distancing is difficult.”

Also in the city’s announcement, Mayor John Tory said it was another of Toronto’s “deliberate and meaningful” steps out of the COVID-19 restrictions.

“This pandemic has affected our day to day life in so many ways,” Tory said. “Things we have taken for granted have been taken away and are now slowly returning.”

For the most up-to-date information on which public washrooms have reopened in city parks, please go the city’s web page at toronto.ca/covid-19 and look in the Washroom and Sanitation Services section.