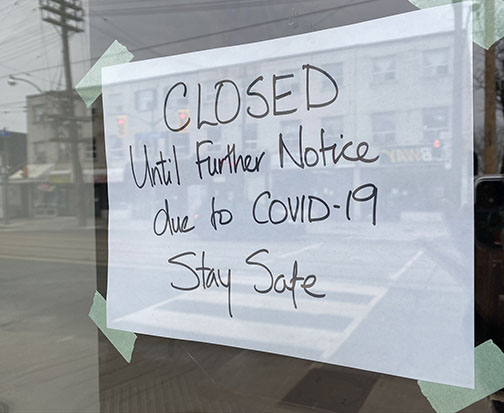 There’s “no new funding” in the recent federal funding announcement as municipalities struggle with operating costs resulting from the COVID-19 pandemic.

On June 1, Prime Minister Justin Trudeau announced funding for municipalities through the Gas Tax Fund will be accelerated – instead of two annual payments, municipalities will receive one combined payment in June.

The Gas Tax Fund is a permanent source of funding provided to municipalities twice a year to support local infrastructure projects. The total pool of $2.2 billion is split among communities across the country.

“This is inadequate and misses the mark,” Bradford said in a Tweet. “No new funding for cities in today’s announcement. No dedicated operating funding for TTC needed to maintain service levels for buses and subways.”

“Feds and province need to sit down and hammer this out,” he added.

Much of the funding coming from the Gax Tax Fund is already accounted for in infrastructure budgets and projects that are in place with or without a global pandemic.

Physical distancing guidelines, combined with the pandemic response at local levels has severely cut into existing budgets of municipalities. The City of Toronto, after deferring property tax payments as an initial response, is now forced to cut TTC funding by half, in one of many examples of financial pressures the city faces.

“Municipalities across the country are working overtime to support frontline action,” Bradford said. “The financial impact on our operations has put them in a crisis and has threatened vital services.”

Beaches-East York MP Nathaniel Erskine-Smith has reiterated that the announcement is “only a first step” and supports more funding for Toronto for operating expenses.

“I will be calling for more support for our cities directly from the federal government,” he said. “There’s still debate around how much, what that looks like, and whether provinces should have to step up.”

Cities in Canada are unable to run deficits by law.

Erskine-Smith said as cities are “creatures of the province,” the provincial government needs to play a more important role to provide new tools or avenues to assist in recovery. For example in April, British Columbia’s government authorized its municipalities to borrow interest-free from existing provincial capital reserves to pay for operating expenses.

Which means, temporarily, B.C. municipalities can run deficits. Kamloops has already done so.

“We can’t expect our municipalities and large urban centres to go at it alone,” Erskine-Smith said. “I think at a minimum, a 50/50 cost-sharing between federal and provincial is what we need.”

He added that “90 per cent of every dollar spent” on the pandemic response has been from the federal government, saying “Ontario has to step up.”

The Federation of Canadian Municipalities also criticized the federal announcement for lacking “new money.” The advocacy group representing more than 2,000 municipalities across the country said more is needed.

“This money has already been accounted for in municipal budgets and does not address our crisis of non-recoverable loss – or the stark choices cities and communities now face,” FCM president Bill Karsten said.

“The fact is there will be no economic recovery without a solution to the municipal financial crisis,” he added. “We need all governments working together on this—and that needs to happen now. Without emergency funding, cities and communities are out of time and options.”

Federal spending on the COVID-19 response has already hit more than $152 billion, while provincial spending in Ontario is at $17 billion.

The City of Toronto estimates non-recoverable losses of $1.5 to 2 billion dollars, Mayor John Tory said on May 22.

“Anything that helps with cash flow right now is a positive thing,” Bradford said. “But without the money to cover losses, the financial situation in Toronto looks very bleak.”