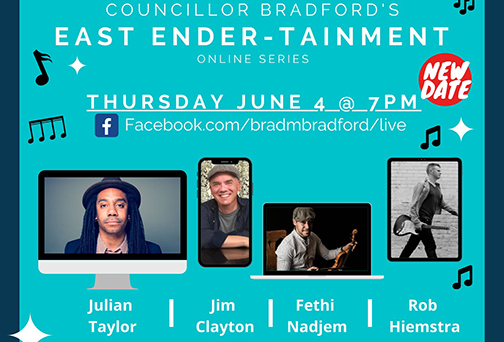 The East Ender-tainment Music Series has changed the date of its final online concert to the evening of Thursday, June 4.

Hosted by Beaches-East York Councillor Brad Bradford, the concert had originally been scheduled for tonight (May 28) but had to be re-scheduled due to a conflict with the online Toronto Council meeting taking place today.

The June 4 concert, which can be seen on Facebook Live, will start at 7 p.m. and feature performances by Julian Taylor, Jim Clayton, Fethi Nadjem and Rob Hiemstra.

Along with the performances, there will also be conversation with the artists.

To view the June 4 concert, go to www.facebook.com/bradmbradford/live