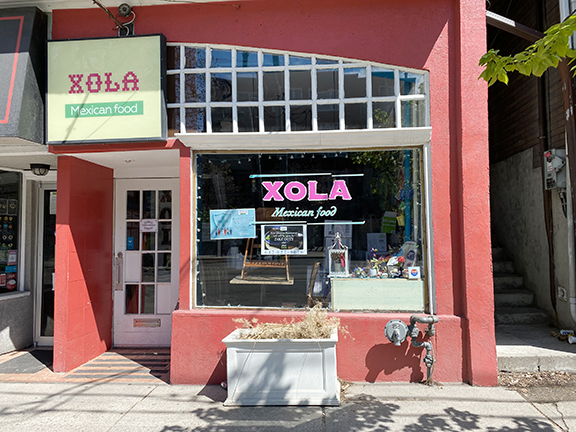 XOLA Mexican Restaurant on Queen Street East in the Beach is among many local restaurants, bars and cafes that would benefit from extra outdoor patio space as they deal with the COVID-19 pandemic. Photo by Susan Legge.

Restaurants, bars, and cafés on Danforth Avenue and Queen Street East could get a desperately needed boost as the City of Toronto assesses the possibility of “outdoor dining districts” to help small businesses recover from the COVID-19 pandemic.

It might even involve closing down adjacent road lanes to allow adequate space for restaurants and bars to configure their seating in accordance to physical distancing guidelines to allow for sitting customers.

Mayor John Tory is on record as supporting the idea and East Toronto BIAs feel that both Queen Street East and the Danforth would be obvious candidates for the dining districts.

While local politicians and business owners are receptive of the idea, they note there are many complicated hurdles to overcome before it could become reality.

“We need a contextual response,” Beaches-East York Councillor Brad Bradford said of helping restaurant and bar owners to get through the COVID-19 crisis. “The process that’s involved is challenging for a small business just to get the necessary permits and licences to do some of this.”

Since the beginning of the pandemic, many restaurants across the city have invested in personal protective equipment (PPE) such as masks and plexiglass guards, but having to invest money for PPE and trying to obtain permits and licences remains challenging for small businesses already struggling on lean margins.

“It’s a big ask just to operate,” said Danforth Mosaic BIA manager Colin Johnson. “Danforth is particularly lucky because our sidewalks are significantly larger than other areas of the city. We have the space already, and these regulations will give business owners the ability to utilize it in full.”

Indeed, formulating guidelines and regulations for restaurants involves the province, and multiple city departments including public health and transportation services. But the need is vital for the survival of the city’s economy, Toronto-Danforth Councillor Paula Fletcher said.

Some restaurants, bars, and cafés have managed to maintain course – albeit with some challenges – by increasing their online presence and food delivery.

Beach Village BIA executive director Anna Sebert said while those initiatives been helpful for restaurants, the reopening phase has to have clear guidelines. “Ones that are easy to understand and follow,” she said.

“We’re supportive of the idea of extending patios and seating areas, and we’ve been pushing for it in our neighbourhood,” Sebert added. “The situation is made more agonizing for restaurant owners due to the seasonal nature of our neighbourhood.”

Prompted by warmer weather, the months between May and September are critical for restaurants to stay afloat, and Sebert worries that by fall many might be forced to close.

Restaurant owner Mali Fernandez, who runs Xola Mexican Restaurant on Queen Street East near Beech Avenue, said that while times have been tough, she’s received “incredible support” from the community.

“To be honest the crisis has not hit us as hard because of it,” she said.

“We think the idea of expanding our business area to allow for patio seating at the street level would be a great idea. Our restaurant is quite small, and it would be difficult to comply with physical distancing rules indoors as it is.”

Fernandes brought up other ways to help restaurants like hers, including also allowing an extension of their liquor licence for the outdoor patios, sales of which provide a much-needed boost in the summer.

“I understand it’s provincial, but all of this would be a great boost for many small restaurants like ours,” she added.

Other communities are seeking similar solutions. Markham city council is planning to enact a temporary bylaw to eliminate a cap on the number of patio seats a restaurant can have – which was initially based on their indoor seating capacity.

The solution requires a “transformation,” Bradford said, as he notes that some small businesses in Toronto’s main streets “have been struggling for many years,” and delaying assistance will exacerbate additional difficulties brought by COVID-19.

“Our business as usual approach, or historic way of doing things, it takes too long,” Bradford said. “It’s too cumbersome, and it doesn’t lead to results.”

“If things look the same after this, we’ll have missed the moment,” he added.