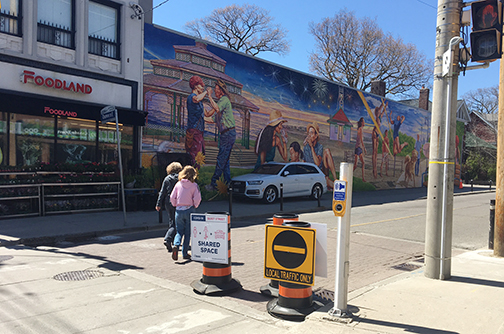 Lee Avenue (shown here at Queen Street East) will see traffic restricted as it has been designated a Quiet Street from Kingston Road to Alfresco Lawn. Photo by Alan Shackleton.

A portion of Lake Shore Boulevard East in the Beach will be closed this weekend for residents to enjoy more space while keeping safe physical distancing.

From east of Coxwell Avenue to Kew Beach Avenue, which is just north of the curve and south of Queen Street East, Lake Shore Boulevard will be closed to eastbound traffic on Saturday, May 23, and Sunday, May 24.

This weekend’s closure is part of the City of Toronto’s ActiveTO initiative which aims to give people who are walking, rollerblading, cycling, skateboarding or using other non-motorized ways of getting around to be able to have more space to do so while continuing to practice safe behaviour during the COVID-19 pandemic.

The Lake Shore Boulevard East closure of eastbound traffic lanes will take place from 6 a.m. May 23 to 11 p.m. on May 24.

Last weekend, a portion of Lake Shore Boulevard West was closed near The Exhibition Grounds and there was a large turnout of people using the extra space.

Beaches-East York Councillor Brad Bradford said that ActiveTO is all about getting people back outside and enjoying their communities in a safe way.

“A big part of recovering from this pandemic is making people feel comfortable about going out again,” he said.

“It has to start incrementally and with local trips where we can practice physical distancing. It’s also important to find safe ways for people to get outside and be active if they can. Last week’s active streets on Lake Shore West was a lot of fun.”

The Lake Shore Boulevard West closure will also take place this weekend, May 23 and 24. Also closed this weekend will be Bayview Avenue from Mill Street to Rosedale Valley Road, and River Street from Gerrard Street East to Bayview Avenue.

The ActiveTO features a mix of Major Street Closures (such as this weekend on Lake Shore Boulevard East) and also a large number of roads being designated as Quiet Streets so there is more room for pedestrians and significantly reduced traffic.

Bradford said allowing space that might normally have been given to vehicles travelling through a neighbourhood, is now being prioritized for the use of residents in the area of those streets to get outside and enjoy them safely.

“Cities around the world are responding to the pandemic by opening up streets,” he said. “San Francisco, Portland and Oakland are doing quiet streets already.”

In East Toronto, there’s a number of roads being designated as Quiet Streets and traffic barrels and signs have been up by the city to mark them as such.

Local Quiet Streets, which are designated as closed to all but local traffic, include: