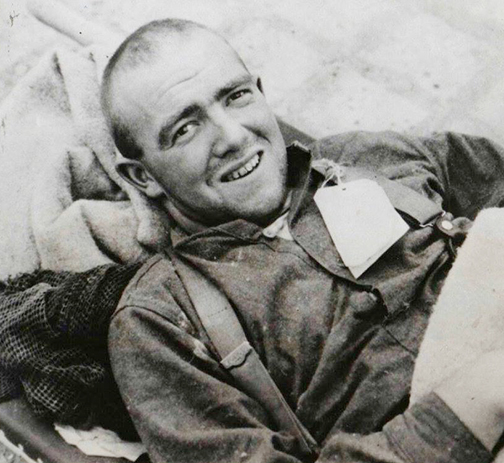 George Alexander McNicoll served in the 1st Canadian Parachute Battalion. Inset photos show Aubrey Wauthier, who served with the RCAF in the Demon Squadron; and a photo of Winston Churchill that may have been taken by Wauthier.

George Alexander McNicoll, born April 28, 1925 in Capreol, Ontario was a man to be remembered. Having worked as a fireman on the railroads in Northern Ontario prior to his early enlistment at the age of 17, George trained in Shilo, Manitoba and Northern England for two years before becoming a paratrooper with the 1st Canadian Parachute Battalion.

During the war, he and his battalion dropped into France the night before D-Day with the primary goal of blowing up bridges to prevent the Germans from retreating or sending reinforcements towards the beaches during the invasion of Normandy.

Injured twice during his service, George fought in part of D-Day, the Battle of the Bulge, and helped liberate the citizens of Wismar, Germany with Canadian forces on May 2, 1945.

For his service, George received the 1939-1945 Star, the France and Germany Star, the Canadian Voluntary Service Medal, the Defense Medal, the War Medal 1939-1945 and the rank of Knight of the French National Order of the Legion of Honour for his involvement in the liberation of France during the Second World War.

Following his service, George moved to Toronto and became a member of the Baron Byng location of the Royal Canadian Legion, Branch 001 on Coxwell Avenue.

In Toronto, George worked as a milkman for Borden’s Dairy, a taxi driver and a machine operator with the City of Toronto at the Keele Street. Transfer Station and met his wife Evelyne (Lynn) Giroux, whom he married on June 13, 1953.

Fathering two daughters, George and his family lived in a loving home on Rhodes Avenue. Simply put, George could be described as a hard worker, a dedicated friend and neighbour with a sense of humour who was kind to children and loved animals.

A generation of East Enders will remember George as the man who would bring home hockey sticks and toys for them, providing childhood enjoyment they may not have had otherwise. Later retiring to a lake side cottage that he and his wife built on Big Yirkie Lake in Denbigh, Ontario, George lived out his days in comfort while watching and being highly involved in the lives of three grandchildren and two great grandchildren, many of whom, along with their families, still reside in the neighbourhood today.

With growing age, he and Lynn moved into the nearby town of Renfrew where he spent his days before passing away on Sept. 15, 2015. His family, and all who George influenced, will remember him fondly with respect and endearment for his involvement in their lives.

There is a book entitled Out of the Clouds, written by John Willes that details the work and dedication of service to country by the 1st Canadian Parachute Battalion.

My father, Aubrey Wauthier, was born and raised in Caledonia, Ontario and served in the Royal Canadian Air Force, Squadron 407, the “Demon Squadron”, as a wireless navigator and bomber. He mostly flew in Hudson, Vikor Wellington and Lancaster aircraft and was stationed in England. In June of 1942, he bombed a medium size enemy vessel in the “face of heavy opposition” (Hamilton Spectator).

In the late 1980s, I discovered that our Scarborough next door neighbour, Eric Tipping, was an air mechanic in dad’s squadron and although they didn’t think they knew each other, they figured that they probably would have met at some point during the war.

Later, Eric was also the President/Secretary of the Demon Squadron organization’s Reunion Committee and over the years, he happily arranged to have my parents attend a couple of their annual reunions in Comox, British Columbia. Dad rarely spoke about his war experiences but when he did, he spoke with enthusiasm and pride. I wish that I had taped one such time when he spoke at great length, especially about a ‘near-miss’ bombing mission.

He was lucky to come home alive, after three years away from my Czech mom, whom he had just married prior to leaving.

I’m not sure if my dad or someone else took the photo of Winston Churchill.

I remember that day as though it was yesterday…..I was sitting in Mrs. Kelly’s Grade 7 class on the third floor of Williamson Road School.

A telephone call came to the black phone box situated on the wall beside the door. Mrs. Kelly hurried over to answer as if she was expecting a very important call.  There was silence in the room as she listened to the message.

She paused with her back to the class for a minute or two before she turned to face us.  Her eyes were glistening with tears as she said:  “The war is over.  Class is dismissed”.

We all shouted “Hurrah” and rushed out of the door… I heard later that Mrs. Kelly’s husband had been killed overseas.  I also heard that her father, Dr. William D. Young, was the well-known paediatrician, whose beautiful memorial still stands in Kew Gardens.  Mrs. Kelly was a fine person and a wonderful teacher.

FAMILY WERE REFUGEES IN GERMANY WHEN WAR ENDED

Here is a story of the Second World War in Europe.

My family and I were in Germany when the war ended. I have many vivid memories from that time, even though I was only six years old.

At that time, we were refugees in Germany, having escaped the Soviets who had taken over our native country Estonia. Many Estonians who did not leave ended up in prison camps in the Soviet Union.

We lived in Bavaria, Germany then until the war ended. After the war we ended up in a D.P. (Displaced Persons) camp.

Some time after that we had the chance to emigrate to Canada. My dad was so very happy to have the chance for us as a family to come to Canada.

Eventually we became Canadian citizens. We have been thankful ever since.