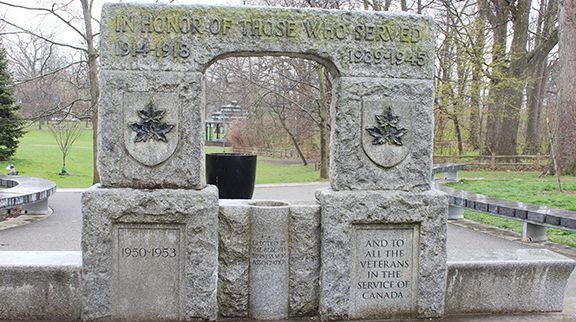 The Kew Gardens War Memorial fronts the north entrance to the park on Queen Street East in the Beach.

Seventy-five years ago today was VE Day – Victory in Europe.

We hoped that was the end of war forever.

Millions of lives were lost in this war. In the Beach, people were exhausted by this long and terrible war that took so many lives including those of local residents.

Many men and women went overseas to fight for the cause of freedom and their country. Some came back. Some did not.

The memory of those brave soldiers weighed heavily on the minds of the people of the Beach. Many were probably asking, “Did they give their lives in vain?”

To make sure they would never be forgotten, the people of the Beach came together to honour the memory of their friends, neighbours and loved ones.

They put up a symbol in Kew Gardens, a monument to those to be remembered.

Within a year this monument was built in their honour.

Their spirit and this symbol lives on then and now.