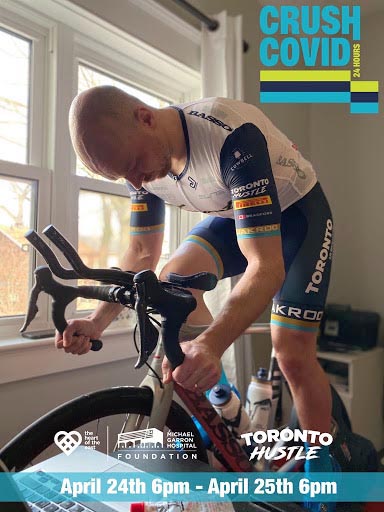 The event began at 6 p.m. on April 24 and continued for the next 24 hours with participants either riding as members of teams or as individuals from their homes. Funds raised will be used by the Coxwell Avenue hospital purchase needed equipment, respond to emerging priorities and support its front-line workers in the fight against the COVID-19 virus.

Bradford was among the cyclists who rode his indoor bike in his home for 24 hours straight, a feat which could be followed by people on Facebook in order to raise awareness and donations.

“It’s over. Twenty-four hours in the saddle. To the 39 teams, 418 riders and 2,272 donors who helped raise over $200K for the Michael Garron Hospital Foundation – I’m speechless. Your support is what kept me going  over the 24 hours. Now it’s time for some rest,” said Bradford on Twitter at the completion of the event.

CRUSH COVID was organized by Bradford and Toronto Hustle, (which encourages cycling, develops talent and advocates for safe streets). Along with securing funding support prior to the event, donations could also be made as it was taking place.

During Saturday, the CRUSH COVID event drew lots of attention on regular and social media which saw many donations take place that day.

On a number of occasions, supporters were outside Bradford’s home cheering him on. He also got a round of applause from people on his street when the ride was done.

When the marathon was finished congratulations came in from across the city and country, including a Tweet from Prime Minister Justin Trudeau.

“Hey Brad Bradford, congratulations on an extraordinary accomplishment! What you’ve done for our health care workers is inspiring – they definitely deserve this. Thanks to you and your team for going the extra mile(s) to CRUSH COVID,” said Trudeau’s Tweet.

Mayor John Tory, who was on hand virtually to help start the event, also offered his congratulations when it was completed.

“Congratulations to Toronto City Council’s very own Brad Bradford and the entire Toronto Hustle team on completing a 24-hour virtual ride to CRUSH COVID,” said Tory on Twitter, praising the “strength and determination” of the participants.