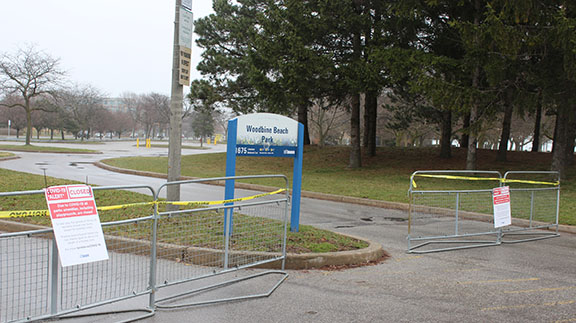 The Woodbine Beach parking lots, accessible off of Lake Shore Boulevard East, were closed on March 30 to stop the gathering of crowds in the area. Inset photo, the off-leash dog park by the Leuty Lifeguard Station is among park amenities closed by the city last week in the fight against COVID-19. Photos by Alan Shackleton.

The parking lots allowing access to Woodbine Beach were closed by the City of Toronto this week in order to deter the gathering of crowds in the area as part of the efforts to fight the spread of the COVID-19 virus.

Scenes of groups of people gathering on the beaches in the area and walking on the Boardwalk while not observing safe social (physical) distancing guidelines this past weekend were one of the reasons for the parking lot closures.

“On Monday we had to close the parking lots around the beach because people weren’t following the advice of our Chief Medical Officer of Health,” said Beaches-East York Councillor Brad Bradford in a statement to Beach Metro News this week.

Mayor John Tory said in an interview with CP24 on the morning of March 30 that he was frustrated by seeing images of people last weekend gathering in local parks and in a number of cases ignoring the closure of park amenities such as off-leash dog areas, tennis courts and playgrounds which had been ordered closed by the city last week.

He also said city bylaw enforcement officers would be fining people who broke the rules by using closed park amenities. “While we always try to persuade and educate people, I’m afraid the time is up for those who don’t want to listen or care, and for them we won’t hesitate to issue $750 fines for using closed park amenities so people get the message. We are doing this to save lives,” Tory said on his Twitter account on March 30.

Bradford said his office has been inundated with calls from local residents who are trying to figure out if they were still allowed to walk on the local beaches and on the Boardwalk.

For now, he said, people are “still allowed on the beach, trails and green spaces across the city – including the Boardwalk” but they must practice safe physical distancing and not gather in groups.

“We are all being asked to only use these spaces while practising physical distancing rules and if you’re walking, running or rolling through. Everyone is asked not to linger. Public spaces are not a destination right now and they’re not a place for meeting friends or family,” Bradford said. “As we should all know, we’re not meant to be seeing friends and family outside our household in person. We should all be staying home unless absolutely essential.”

Bradford said he realized it was a stressful situation for many residents who fear losing access to the beach and Boardwalk, but the gathering of crowds in the area cannot continue.

“There has been a lot of confusion around whether or not the beach is open… With the better weather coming I understand the desire to be outside but I am very concerned about the messages and pictures I’m getting of the beach being full this past weekend,” he said.

“The general advice for every Torontonian, Canadian and frankly – much of the world at the moment – is that we should be practicing physical distancing and staying home unless necessary to go outside. From what I’m seeing and hearing, that doesn’t always seem to be the case for some individuals, and that’s very concerning as we’re trying to get a handle on this pandemic.”

Bradford reminded residents that the closure of the park amenities applies to everyone. If people continue to ignore those rules, the city may take further actions to stop the gathering of crowds.

“Again, we are being asked as a community, as a city, to follow these request. If individuals are not following the advice they’re being given then these spaces can be shut down entirely. The Mayor has drafted a bylaw which would ban access to City property and public spaces like the beach and Boardwalk. We’re not at that point yet.

“There’s some merit to keeping those spaces open for people to get some fresh air and daily exercise, but that’s all. Right now there’s an option to go for a walk across the sand on the beach. It’s a stressful time and so having the opportunity to go to our public spaces is a relief for many, but we have to be sensible. Don’t plan to stay and if you can’t practice social distancing safely, make a different plan to get outside.”

Bradford said he well aware of how important the Boardwalk and the beaches are to local residents, and how a walk by the lake can help calm nerves and reduce stress for those who have had their regular lives so drastically changed by the impacts of COVID-19. However, he said we need to take the correct measures now to stop the spread of virus and help people to able to return to normalcy sooner.

“I know we all love being down at the beach especially after enduring the long winter months. If we can follow this advice, we’ll get all of this done with sooner. In any case the wait to be back will be worth it, and we’ll all enjoy the beach healthily, happily and safely.”

For a full list of park amenities ordered closed by the City of Toronto, please visit https://www.toronto.ca/home/covid-19/affected-city-services/