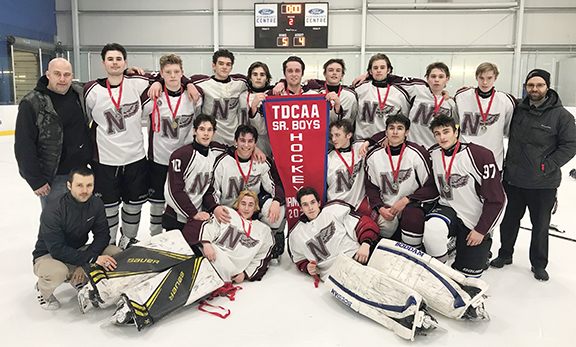 The win also qualified the Neil McNeil boys for the Ontario Federation of School Athletic Associations (OFSAA) championships which had been planned for Windsor from March 25 to 27.

However, due to the provincially-ordered closure of the publicly funded school system on March 12, it was announced that the 16-team tournament had been cancelled.

“As many of you are aware, our publicy funded elementary and secondary schools will be closed until April 5 due to COVID-19,” said OFSAA AAA hockey convenor John Talerico in a statement on the tourney’s website. “I have just been informed that our OFSAA hockey championships…have been cancelled. This is unfortunate but the health and safety of our students is our first priority. This is much bigger that the game of hockey and we hope that this action plan can alleviate future cases…Challenges are what make life interesting. Overcoming them is what makes them meaningful.”

The Maroons would have been heading to Windsor as the defending OFSAA AAA hockey champs as they took the title last year in Barrie. This would have been Neil McNeil’s third trip to OFSAA in the past four years.

Maroons coach Peter Ranson said the cancellation of the tourney was “brutal” news for his players, who had been working hard all season and looking forward to defending their title against the best teams in the province.

Ranson said the mood was “very down” among the Senior boys hockey team and coaches once they got the final word that the OFSAA championships had officially been cancelled.

“Myself and the other coaches, we’re heart-broken for the kids, especially the Grade 12s who have been with this program for the last four years. We’re aching for them,” he said.

Ranson said that to see the season end for the Grade 12’s is such a way was upsetting, especially since 10 of the members of this year’s team were Grade 12s.

“It’s been a special four years for these players in Grade 12, and to see their high school careers end like this hurts.”

He said players were coming up to coaches in the halls on Friday, March 13, thanking them for the season.

“That means a lot to us as coaches because we’re doing it for them and to give them memories and experiences that they will always have.”

While not being over confident, Ranson believed the Maroons were on the verge of doing something very special at the OFSAA championships and would have had a good chance of winning back-to-back titles.

In the past two seasons, the Senior boys had a record of 41-1.

He said the team was made of an exceptional group of players, some of whom had passed on other high-level hockey opportunities in order to commit to the Neil squad and its pursuit of a second OFSAA championship in a row.

While far from official, Ranson said there might be a chance that some of the province’s top teams could still be able to organize a tourney outside of the sanctions of OFSAA once the concerns about COVID-19 have passed.

Success in hockey at Neil McNeil does not rest only with the Senior boys team, however.

The Junior boys team had an outstanding season despite the fact they did not have a formal league to play in. Ranson said the Maroons’ Junior team has been a powerhouse for the last five seasons. This season’s highlights for the Juniors included winning the high-level St. Andrew’s College School and Brooklin Early Bird tournaments.

Another highlight for the Juniors was seeing their captain Paul Ludwinski play for Canada in the 2020 Youth Olympics in Switzerland.

The Non-Contact team had a perfect 10-0 season.