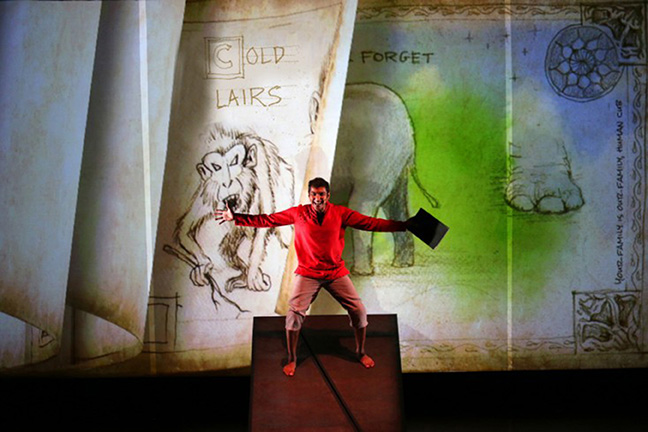 Rick Miller is a man of many titles and talents, and what some may consider a jack of all trades.

A Beach area resident, Miller is a creator, director, writer, actor, musician and educator. He has performed in five languages on five continents. Entertainment Weekly called him “one of the 100 most creative people alive today”.

Though he has achieved great success in the theatre, his initial interests were science and engineering. Miller graduated from McGill University with two architecture degrees.

McGill was where his interest in theatre began to grow. Initially, he participated in plays for fun but he then realized he could put his degrees to use by building in theatres and shows.

Miller explained that he incorporates architecture throughout his work in theatre, as it touches on every other art in interesting ways.

He said his interest in architecture has helped his theatre productions immensely as it encourages him to think from a broader perspective.

“In a way we design our life, and you can design your life randomly or artfully, and you can try to make it make sense or just kind of wing it,” said Miller.

“I’ve always had this sense that I learned how to design well in architecture, and that includes learning how to fail and how to work through failure. But I think the biggest thing is how to put things in a bigger perspective because we’re so stuck in our own little world, our own sense of self and our own screen. Sometimes it is very hard to get perspective. I feel that everything I’ve done I’ve been able to bring that big architectural perspective into it”.

Miller said he includes a piece of himself in many of his productions.

An example of this is his current production of Jungle Book, now playing at Young People’s Theatre until March 21. The production is written by Miller and Craig Francis, adapted from the works of Rudyard Kipling.

Miller, who also directs Jungle Book, said he initially took interest in working on the production because he believes the future of theatre is in the hands of artists making shows that young people will find magical, compelling and relevant.

He explained that his personal story has found its way into the main character of Mowgli.

This adaptation of the Jungle Book goes back to the classic story of Mowgli as a kid in the jungle and as a teenager in the city, except in this case he is an architect who has lost connection with nature. Through this struggle, the character Mowgli must learn how to coexist alongside nature, rather than dominating it.

Miller said he can see himself within the main character, which makes this production special to him.

Many of Miller’s favourite moments in his career are when he can be a part of a community performing.

Some of his previous works include his play MacHomer, a tribute to Shakespeare and The Simpsons, which he ended up touring for many years.

MacHomer led to Miller being listed as “one of the 100 most creative people alive today” by Entertainment Weekly.

He said the title allows him to be remain creative and to not stay stagnant, as it’s a label that he must live up to.

Miller has mastered many roles in the theatre business and his biggest advice to individuals who are interested in joining the field is to be original, work hard and be willing to learn.

“You have never put your personal spin on this until you do it. In that sense, create your own work, feel some control over it and work your ass off to keep making yourself improve. There’s always room to learn more and get better.”

The Jungle Book is on until March 21 at Young People’s Theatre, 165 Front St. E. For ticket information, please visit https://www.youngpeoplestheatre.org/