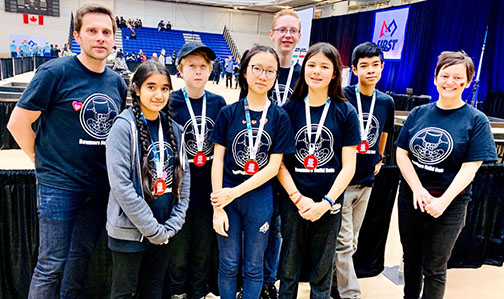 This team is made up of six students and two coaches who dedicated their time to three aspects of the competition: a project component, a core values component based on team-building, and coding.

The theme for this year’s FLL competition was based on City-Shapers, and teams were challenged to tackle a problem in the city and innovate a design or a solution to help resolve the issue.

There was also a coding aspect, where teams were given missions to accomplish through a robot the team created. The name itself, Bowmore Build Bots, was another way of representing that not only a solution to an issue was built on, but the team also built on their core values and their goals.

For the first tournament at Runnymede High School on Dec. 7, 2019, the Build Bots took second place for the Innovation Project Award and third place overall. This allowed them to proceed to the provincial championships at Durham College on Jan. 11 of this year.

The challenge the Bowmore team took on was housing for the homeless. With no transitional homes, shelters and camp-outs being terminated, and the rising population of homeless people, the Build Bots decided to look for an innovative solution that would benefit Toronto as a whole and incorporate equality.

The team came up with a pilot project of tiny homes made of shipping containers, featuring a washroom, small living area, and a bed.

The team members were inspired by their sympathy and knowledge about the thousands who live on the streets, especially downtown. They researched and worked hard from October of last year right through to the championships in January, continuing to learn along the way.

At both tournaments, teams had to present their project, run their coding in a robot presentation, and do a core values activity. The Build Bots successfully accomplished these missions and showed great team spirit throughout with the motivational support from parents and the guidance of their mentors.

The Grade 7 and 8 Build Bots were not the only robotics team at Bowmore. The Grade 4 to 6 team, Bats to the Future, participated in the regionals and showed great teamwork throughout the event.

Although they did not make it to the provincial championships, Bats to the Futre kept their spirit and displayed enthusiasm throughout.

Both Bowmore teams displayed outstanding examples of gracious professionalism even when they weren’t being watched, and they spread word of their solutions by connecting with various experts.

The Bowmore Build Bots had an amazing time throughout the season, and while some of the team members will be moving away from the school next year, they definitely won’t forget the moments they all spent together.