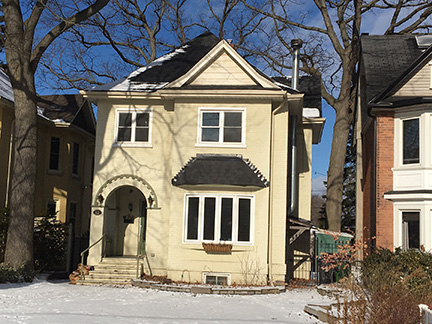 Plans to convert this house at 12 Swanwick Ave. from a single-family home to a two-unit residence have residents in the area concerned.

A proposal to convert a single family home on Swanwick Avenue into two residential units is causing concern among those living in the neighbourhood.

The plan for the house at 12 Swanwick Ave., between Main Street and Norwood Road, calls for the house to basically be turned into a semi with two side-by-side units. This will require a rear third floor and east side addition to be built.

Residents, however, are extremely concerned that the end result will see multiple rental units within the home. They cite that there are numerous entrances to the house, and see these as an indication there will be more than two residential units.

Race said that is not the case. “We don’t want to turn it into an apartment building. We want it to be a beautiful, two-family home,” he said.

Residents are also worried that mature trees on the 12 Swanwick property and beside it will be impacted by the construction of the addition.

Race said protecting trees is a priority for him, and he is working with the City of Toronto on a tree preservation plan.

“We are saving every tree,” he said. “The trees are a huge selling factor and we don’t want them going anywhere.”

Since there a number of variance changes being sought to existing bylaws, the application for the work at 12 Swanwick will be heard by the City of Toronto’s Committee of Adjustment at a meeting on Jan. 29.

Residents in the area are urging those in the neighbourhood to either attend that meeting or contact the Committee of Adjustment in advance with their concerns.

Beaches-East York Councillor Brad Bradford said he is aware of the situation at 12 Swanwick and the concerns being expressed.

He said that according to the plans filed with the Committee of Adjustment, the proposal is calling for only two-units in the house.

Bradford said that because the proposal is “atypical” in that it is proposing two side-by-side units, instead of a second suite in the basement, it has raised some confusion in the neighbourhood.

“When I look at it, it is unusual and a bit different,” he said. “It’s not a basement which we usually see, it’s adjacent.”

Bradford said the process of how people are informed about Committee of Adjustment hearings regarding plans for neighbourhood buildings is “not great” and can lead to misunderstandings and worry.

“I think these situations can be confusing for people and when you are looking at development plans it can be a bit overwhelming for people,” he said. “The process does not work very well when it comes to helping a community understand.”

Architect Race has already met with some residents in the neighbourhood, and Bradford said he would be happy to help bring people to the table again to discuss the plans.

Those wishing to comment on the plans for 12 Swanwick, or attend the meeting to speak, are asked to contact Theresa Tumidajski at 416-392-7334 or by email at Theresa.Tumidajski@toronto.ca

Plans for the 12 Swanwick proposal can be seen by going to http://app.toronto.ca/AIC/index.do and searching by the home’s address.