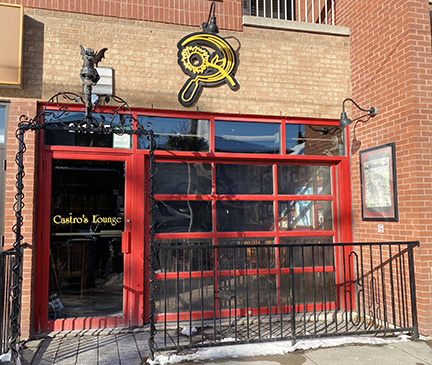 Castro's Lounge on Queen Street East in the Beach will be the subject of a Licence Appeal Tribunal hearing this week regarding the popular local bar's liquor licence.

The Alcohol and Gaming Commission of Ontario (AGCO) will be holding a tribunal hearing this week to consider pulling the liquor licence for Castro’s Lounge on Queen Street East in the Beach.

The Licence Appeal Tribunal hearing is scheduled to begin on Tuesday, Jan. 21 starting at 9:30 a.m. It will take place at 15 Grosvenor St., second floor. The hearing is also scheduled for Jan. 22 and 23, but is expected to only take two days.

According to a statement from the Alcohol and Gaming Commission sent to Beach Metro News, the hearing is being held because the AGCO Registrar “has reason to believe that the licence holder has contravened the Liquor Licence Act (LLA) and the Regulations, or a condition of the licence, and has issued a Notice of Proposal (NOP) to revoke the licence.”

According to a post on the Facebook page of Castro’s Lounge late last week by owner Anthony Greene, a message he sent to an AGCO inspector last year has been part of the reason why the situation has developed to the point of this week’s hearing.

“Here we are. Now, it seems, AGCO is looking to revoke Castro’s Liquor license,” he said in the Facebook post.

“Yes, I did a dumb thing. In the heat of the moment and against my better judgment, I sent the wrong message to a liquor inspector. The message was at the very least an unfavourable characterisation of a civil servant. For that, I am truly sorry. I understand that it was unprofessional and not in the spirit of the relationship that keeps the City and its drinking establishments running smoothly. Why did I do it? At the time, it seemed to make sense. In hindsight, I understand that it wasn’t a smart decision on my part, and I apologise.”

The lengthy post also included mention of the importance of Castro’s to the Beach community and the music and social scene on Queen Street East.

“I for one, along with the team at Castro’s, want to work for the good of the neighbourhood, for the good of the City. Serve beer, respect the community, bring people together, enjoy music, give everyone who wants to have a shot get up and perform. I sincerely hope that we can work past my mistake, my poor judgment and poor choice of words, and keep Castro’s open,” Greene said in the post.

In a comment responding to the post on Facebook, well-known local musician Danny Marks said: “Are people just going to take this? One word comments? How selfish. Offer to help. Offer to take a stand, ask what you can do, don’t be a coward. Pitch in and stand for what you believe. I will. Anthony Greene I await any direction you have, I will go to court to fight for the place, I will go to Hell and back to keep Castro’s alive. That is my word.”

As word began to circulate late last week of this week’s hearing, a petition was started to garner local support to help keep Castro’s liquor licence.

”We the undersigned humbly submit to the Alcohol and Gaming Commission (AGCO) of Ontario our support for Castro’s Lounge in the current dispute aimed at revoking Castro’s Liquor License,” said the petition started by Victoria Stone. ”Castro’s Lounge has been in operation in the Beaches for over 20 years. It is a ‘community hub’ that supports live music and local musicians. It is a beloved gathering place for people from all walks of life in the Beaches.

“Castro’s Lounge is, and always has been, a professionally-run establishment that has been operated with honesty and integrity. It is an integral part of life for many people in the Beaches neighbourhood. It would be a travesty to see it closed.”

In its statement, the AGCO noted that Castro’s “has appealed the Notice to the Licence Appeal Tribunal (LAT), which is an adjudicative tribunal independent of the AGCO and part of Safety, Licensing Appeals and Standards Tribunals Ontario…As this matter is now before the LAT, the AGCO will not offer any additional comments or background to an ongoing hearing.”