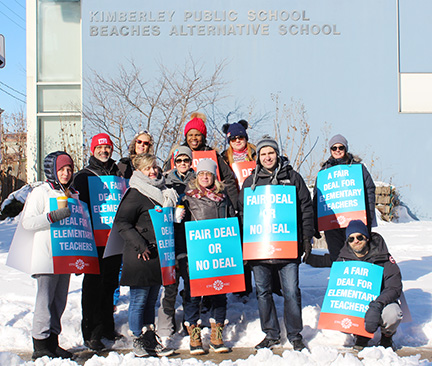 At Kimberley Junior Public School, teachers walked along the side of the school’s property on Main Street and Swanwick Avenue wearing signs saying “fair deal or no deal.”

The Toronto District School Board teachers, who are members of the Elementary Teacher’s Federation of Ontario (ETFO), were taking part in a one-day strike on Monday, Jan. 20.

The strike was one of three across the province taking place today to pressure the provincial government into getting back into contract talks with them. The other school boards that took part in the elementary teachers strike today were from the York Region and Ottawa-Carleton.

“We want to have proper funding for special education, smaller class sizes, especially in our kinders and our juniors.”

Walking today on the picket line at Kimberley were more than just the current staff at the school.  Regular supply teachers and retired teachers also joined alongside them.

At 8:30 a.m. the strike began and the Kimberley teachers received nothing but support from Beach parents as they brought coffee and foods to them, said Glynwilliams.

Even as they stood at the front of the school, cars that passed by honked and pedestrians smiled at them as the teacher’s waved back and thanked them for their support.

Today’s strikes were part of a series of rotating strikes by education unions across the province this week.

On Tuesday, Jan. 21, the Ontario Secondary School Teachers’ Federation (OSSTF) and the Toronto Catholic District School Board (that spans from kindergarten to Grade 12) will be holding a one-day strike.

The OSSTF have been holding rotating one-day strikes since Dec. 4, 2019.

Ontario Education Minister Stephen Lecce has been critical of the strike actions being taken by teacher unions as contract talks with the province remain stalled.

He said his priority is keeping children in the classroom. “Strikes hurt children,” Lecce said.