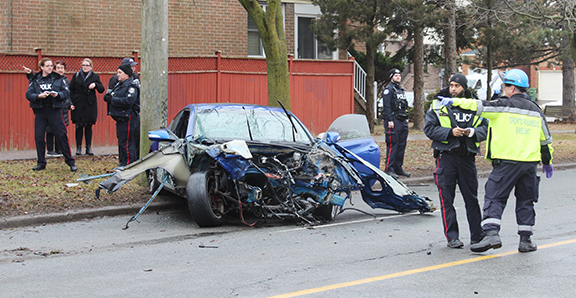 At least one person was ejected from this blue car in a crash late Friday, Jan. 10, morning on Gerrard Street East. The crash took place east of Victoria Park Avenue. The impact was so severe the engine of the blue car was ripped off and ended up in bushes on the north side of Gerrard. Photos by Alan Shackleton.

Seven people were sent to hospital after a two-car crash on Gerrard Street East that took place on Friday, Jan. 10.

The crash occurred between Coalport Drive and Rathmore Avenue at approximately 11:45 a.m. and involved a blue car and black SUV.

Debris from the accident scene was spread all over Gerrard, and the engine from the blue car had been entirely ripped off was in bushes on the north side of the street. Gerrard is expected to remain closed between Coalport and Rathmore for most of Friday afternoon while police investigate.

Toronto police traffic services said on Friday afternoon that seven people had been sent to hospital with injuries as a result of the crash.

Witnesses said at least one teenage boy appeared to have suffered serious injuries after being ejected from the blue car.

Police said did not give specifics on that individual’s injuries, but did say they were non life-threatening; as were the injuries of the other six people sent to hospital.

The blue car was so damaged it was hard to determine its make, but it appeared it might have been a Hyundai Tiburon.

The black SUV was a Ford Escape.

Two witnesses told Beach Metro News at the scene that the blue car appeared to be travelling westbound on Gerrard at a high rate of speed when it collided with the Ford. It is not clear what direction the Ford was heading at the time of the collision.

The blue car spun out of control after the crash, hitting a fire hydrant on the north side of Gerrard before coming to rest on a light pole on the south side of the street.

Al, who was driving his pickup eastbound on Gerrard, said he saw the blue car spinning along the road towards him. “He hit the hydrant, and then he hit the light pole or he would have hit me,” said Al.

He said that he saw a teenage boy lying in the road right after the crash.

“It was like an explosion and it kind of puts you into shock, especially when you see someone is lying in the road.”

Al said there were also lots of flames from the engine which was burning briefly in the bush on the north side of Gerrard.

“I was thinking something was on fire, and the guy was lying in the road. He crawled off the side of the road (on the south side of Gerrard), and he was covered in blood. A lady came out and gave him a blanket.”

Driver Tracy saw the crash in her rear-view mirror as she was driving west on Gerrard.

“I saw the guy come flying out behind me. I looked in the rear-view mirror because I heard the noise,” she said.

Police from traffic services are continuing to investigate. Anyone with information is asked to call them at 416-808-1900.