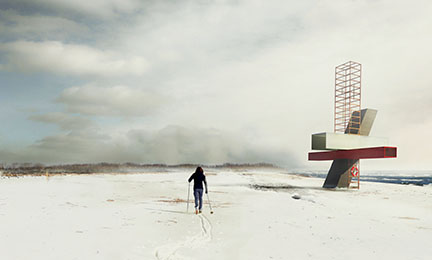 Kaleidoscope of the Senses is one of four installations planned for this year's Winter Stations on Woodbine Beach. Insert photos show (in order) Mirage, Noodle Feed, and The Beach's Percussion Ensemble.

The 2020 version of Winter Stations on Woodbine Beach starts on Feb. 17 and will feature four art installations on display.

The three winning designs, selected from among 273 entries from around the world, for the sixth annual Winter Stations were revealed this week.

The winning designs are Mirage, by Cristina Vega and Pablo Losa Fontangordo; Kaleidoscope of the Senses, by Charlie Sutherland of SUHUHA; and Noodle Feed, by iheartblob.

Making up the fourth art exhibit to be displayed at Winter Stations will be The Beach’s Percussion Ensemble by Centennial College.

Created by RAW Designs, Ferris and Associates, and Curia, Winter Stations was conceived as a way to bring people to the lakefront in the winter months by offering up exhibitions of design and art based on specific themes.

Started in 2014, Winter Stations has become a much-anticipated event in the Beach and a source of pride for the community. The exhibits are displayed at lifeguard chair stations along Woodbine Beach.

The theme for this year’s Winter Stations was Beyond The Five Senses. Artists, architects and designers were asked to explore “how our senses interact and overlap to provide us with a picture of our environment and how we interact with it, demonstrating our subjective relationship to reality or displaying a distorted one.”

Winter Stations co-founder Roland Rom Colthoff of Raw Design said the aim of this year’ theme was to have artists look beyond the five senses and “bring interactive art to the water’s edge.”

“Winter Stations has always been about bringing joy, warmth and conversation to the long, cold Canadian winter landscape,” he said. Mirage was designed to read the movements of the sun and people. Depending on where visitors to the exhibit are positioned, they see either a red transparent sun setting or a light and bright rising sun. As they walk closer, they will see the thin structure that makes these two realities possible.

Kaleidoscope of the Senses re-purposes the existing lifeguard chair and brings together a dynamic composition of elements that are “both a visual and experiential celebration of the senses and a metaphor of the body in space.”

The installation will will feature an open bell tower structure which will create clanking metal sounds while a diagonal chimney will draw up an aroma of oils set into the beach sand at its base. “A horizontal white extrusion reflects the expansive horizon, framing a view of the water and back to the city. This is all underscored by a lateral red beam, establishing a tactile bench within the structure, the only point of physical contact with the observer. Noodle Feed creates a shared augmented reality environment where people can interact in new ways and consider “that the world is much more than we perceive.”

The “noodles” are designed to attract attention and the “rough matte texture of recycled sailcloth contrasts with the soft, springy cushioning of the objects, inviting visitors to move them in to chairs, beds and shelters.”

An augmented reality app will also let visitors to the installation leave digital traces of their time spent, including photos and stories, that can be seen by other users.

The Centennial College installation, The Beach’s Percussion Ensemble, will consist of three structures of varying sizes formed of a series of stacked wooden prisms in a circular shape beside a giant steel drum. Metal bells will hang as well, releasing sounds like a wind chime. Visitors will be able to use sticks attached to the structure to make their own sounds and join the ensemble. Graffiti artists are also being invited to “tag” The Beach’s Percussion Ensemble installation.

Along with Woodbine Beach installations, Winter Stations has also expanded to include other exhibits along Toronto’s waterfront. In partnership with the Waterfront BIA, this is called Ice Breakers.

For this year, Loop will be installed at the York Street Park from Jan. 15 to Feb. 9. Loop is a cross between a music box, a zoetrope and a railway handcar. More than two metres in diameter, it will create animated fairy tale loops when a group of people work the hand lever.