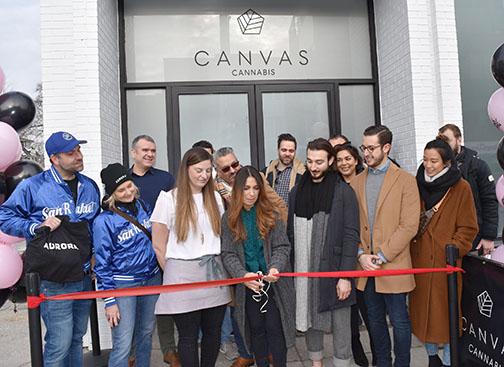 The Canvas cannabis store celebrated its grand opening on Monday, Dec. 16 in GreekTown on the Danforth. Another East Toronto cannabis store, located at Kingston and Scarborough roads, is aiming to be open sometime in mid to late January.

A number of cannabis retailers are open or planning to open in the very near future in the East Toronto area.

On Dec. 16, Canvas at 730 Danforth Ave. between Pape and Jones avenues held its grand opening celebration.

Canvas is the sixth cannabis retail store to legally open in the City of Toronto, according to a press release, and is operated by Helene Vassos.

According to the press release, Canvas is the only cannabis store in Toronto so far to have a woman as its sole owner.

“We wanted to create a very different aesthetic, using warm hues and natural elements for a very subtle, stylized elegance,” said Vassos of the store in the press release.

“We want our customers to feel comfortable in our shop, and to know they’ve arrived at a place where they can relax, take their time and acquaint themselves with our service and our product,” she said.

Vassos pointed out that in opening the store and deciding on how it would present itself, she was “extremely careful” to build a brand that nearby residents would find inviting.

“I grew up in the Danforth area, so I have a deep connection to the neighbourhood. Because of that, I took great care and attention to build a store that fits with the existing culture,” said Vassos, who had a 30-year career in the non-profit healthcare sector prior to taking on the ownership of Canvas.

She had been thinking about what retirement might look like prior to entering the Alcohol and Gaming Commission of Ontario’s (AGCO) lottery for a cannabis retail store licence earlier this year.

“I saw this amazing new industry unfolding in front of me and I realized, ‘Wow, this is an incredible opportunity for me to help lead the way in this evolving industry, as both a woman and a small business owner,’” Vassos said in the press release.

Located in the GreekTown on the Danforth area, the store opened up to no controversy or concerns from the surrounding neighbourhood.

The same cannot be said for the cannabis store expected to open early next year at the site of the former Randall’s Stationery on Kingston Road. Sessions on the Beaches, at 964 Kingston Rd. just west of Scarborough Road, is hoping to be open by mid to late January. Renovation work is currently going on at the site of the store.

The idea of a cannabis store in what had been home to Randall’s Stationery for approximately 80 years caused controversy in the community for a number of reasons. Some residents simply could not come to terms with the idea of the iconic Randall’s becoming a cannabis store while others were concerned with its proximity to the nearby Beaches Montessori School.

Back in August, when word first came out that a cannabis retail licence had been granted to the new owner of the Randall’s store site, questions were asked about why preschools were not included in the exclusion zones established by the Ministry of Education for cannabis stores.

The Ministry’s guidelines said cannabis stores could not be located within 150 metres of schools, but preschools were not included in those guidelines and the Beaches Montessori School was only four doors west of the Kingston Road cannabis store site and less than that distance.

The guidelines, however, only applied to schools teaching students ages six and older (the compulsory age for education.) and did not include preschools with students five years of age and younger.

Beaches Montessori School owners Julie Mitchell and Leigh Anne Jacques had looked to get an explanation on the exclusion zone guidelines from both the Ministry of Education and Ontario’s Attorney General, but said they never received a clear answer.

Many of the parents of students at the school had expressed concerns about the proximity of the cannabis store and how it would impact the safety of their children.

No explanation was forthcoming, however, and that reflects badly on the provincial government, said Beaches-East York MPP Rima Berns-McGown in a recent interview with Beach Metro News.

“It’s a mess that they’ve created and it’s not fair,” said Berns-McGown, who is an NDP MPP, of the situation created by the ruling Conservative Ontario government regarding rules and regulations for cannabis retail stores.

“I feel the government has done nothing,” she said, adding that she reached out personally to Minister of Education Stephen Lecce and Attorney General Doug Downey seeking an explanation on the guidelines and lack of provisions regarding preschools.

“I told them it is your responsibility to deal with the concerns of the school and the parents of the children, and nothing happened,” Berns-McGown said.

She added she has no problem with the opening of cannabis retail stores, but there need to be clear rules regarding children’s safety if they are close to a preschool.

“My issue is not that there’s a cannabis store opening there. The problem is there is no protocol for stores in locations like this,” said Berns-McGown.

“It’s very reasonable to have expected the government to deal with this near schools and preschools. That’s pretty basic. Obviously people feel strongly on both sides of this, but the store is going to be there so what are the protocols.”

In a statement sent To Beach Metro News, Sessions on the Beaches said it is governed by very strict AGCO regulations and the Cannabis Licence Act regarding its operations.

“Sessions on the Beaches will ensure that we meet or exceed all regulatory measures to ensure we are selling cannabis in a safe, responsible and lawful manner,” the statement said.

“Sessions on the Beaches will have protocols in place and ongoing staff training on product and social responsibility, to ensure that cannabis and/or cannabis accessories do not get into the hands of persons under 19 years of age or intoxicated persons, in full compliance with government regulations.”

For more information on Sessions on the Beaches, please visit https://sessions.ca/