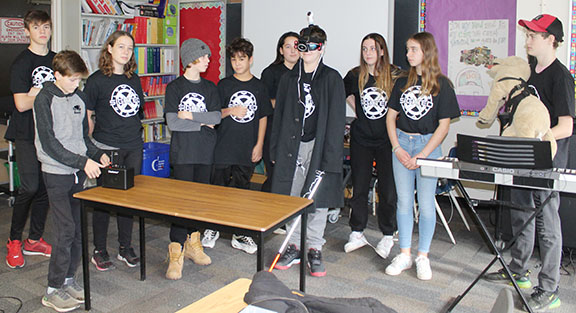 Grade 8 students at Glen Ames Senior Public School are preparing for another season of robotics competition in the FIRST Lego League (FLL).

This year’s team of 10 students from Glen Ames are calling themselves X-Sighted DC, and they will kick off the robotics competition season at a regional qualifying meet in Whitby on Saturday, Dec. 14.

Teacher-coach Luke Martin explained that the team rebrands itself each year with a new name and group of students to compete in the FLL competition. Team members for this season are Hayden H-C, Georgia B, Rachel S, Beck M, Xavier R-D, Zach W, Julia S, Anthony F, Elise D, and Luke J.

Students wishing to be on the team have to try out, and making the team is a big honour.

“This is a very desirable program and it is so great to see the kids learning from the experience,” said Martin.

The Glen Ames robotics program has an impressive history, with teams from the school qualifying for the provincial FLL championships for the past nine years in a row.

Last season’s team also qualified for the international championships in California (the third time in a row for the school). That team, Guardians of the Galaxsee, won first place in the Project Presentation category at the United States FIRST Lego League (FLL) Open Championships in California in May. It was the first time a Toronto District School Board robotics team won a first in an international competition,

The FLL is an international alliance between Lego and FIRST (For Inspiration and Recognition of Science and Technology). Each year it asks teams of students from around the world to use robotics and technology to come up with solutions to real-world problems based on a theme.

The theme for this season’s competition is City Shaper and it challenges students to help plan for the future of cities by creating “new, innovative solutions to help shape an optimal future, using our environment and modern-day tools and technology to make it last.” The teams must use Lego Mindstorm technology to create their project.

Taking that challenge as their starting point, Team X-Sighted DC decided to use their robotics and technology skills to come up with a way to make navigating cities easier for visually impaired people.

They call their project The Isight 360.

It has a local inspiration in the recent work of former Glen Ames’ student Maddie Dick, who partnered with Dalia Amer, to try and get the City of Toronto to install more Accessible Pedestrian Signals in East Toronto neighbourhoods.

“Our project addresses the pressing and relevant issue of visually impaired people getting around the Beach community,” said Team X-Sighted DC’s project statement.

To do this, the team created The Isight 360 system which contains a 360-degree camera, a speaker, a virtual reality headset, ultrasonic glasses and a “smart cane” that includes a touch sensor.

The cane has been programmed to activate the ultrasonic glasses and an echo-location system depending on how many times it is tapped. The Isight 360 system also allows its user to turn on the camera and to contact a family member if in need of assistance.

The glasses take ultra-sonic readings and let the user know how close they are to objects, and whether they are in a busy area or in one with more open spaces. The system’s camera takes live 360-degree footage which can be accessed by a family member or loved one of the person using it to help them navigate an unknown area if need be.

Creating The Isight 360 took a lot of work on the part of the students, who had to come up the idea, evaluate its practical usefulness, then design, build and program it to operate properly.

Part of the evaluation process consisted of consulting with Canadian National Institute for the Blind and tech company Slalom.

Along with the technology aspect of a project, the FLL also judges teams on their ability to work together and how they present their project.

Team X-Sighted DC builds on the many skills of its members, including their creative and musical talents.

“The students have put in lots and lots of hours on this,” said Martin. “They are very passionate towards it.”

Living up to past successes of former Glen Ames teams does put some pressure on the members of Team X-Sighted DC, but they are taking it in stride.

“Mr. Martin does not put pressure on us. He is motivating but not pressuring us,” explained Elise D. “We feel blessed and lucky to be here as part of this team, and we are working hard and learning a lot no matter what happens.”