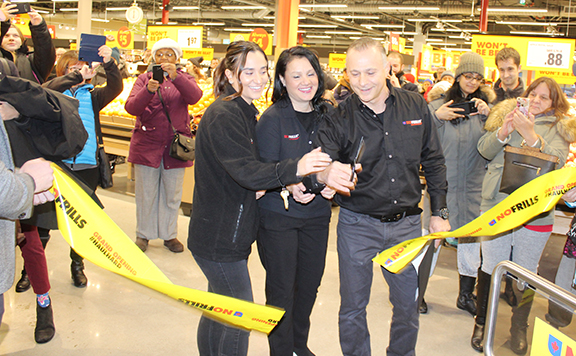 John Rocca, right, cuts the ribbon to mark the re-opening of the Rocca's No Frills on Coxwell Avenue on Thursday, Dec. 5, morning. Also taking part in the ribbon cutting are Nicolette Rocca, left, and Carmen Rocca, centre. Inset photos show customer Mya Barton in front of the store, and Lee, Coraleigh and Brady with their gift bags. Photos by Alan Shackleton.

Customers started lining up before 7 a.m. this morning (Thursday, Dec. 5) in anticipation of the grand re-opening of the Rocca’s No Frills at 269 Coxwell Ave.

The doors opened at 7:30 a.m. and the customers surged in through the east side entrance off the Gainsborough Road parking lot for the opening ceremonies inside the store which included speeches, a donation to the Daily Bread Food Bank and a ribbon cutting.

“The community has really missed this store,” said customer Mya Barson in the line shortly after 7 a.m.

“I want to buy local and even though this is a big box store, it’s buying local and supporting the stores in the area.”

The store had been greatly missed since it closed suddenly in May of 2016 due to the need for urgent repairs to the building. As it turned out those repairs proved complicated and much of the store had to be entirely rebuilt, which took longer than had been originally expected and caused ongoing concern for the neighbourhood which had no other large grocery store.
No Frills set up a shuttle bus from the Coxwell store to the No Frills near Carlaw and Gerrard for customers who needed to shop. “I took the shuttle a couple of times, but I didn’t really like the Carlaw store,” said Barson.

She added that the shuttle drivers were always very nice but the Carlaw store “was not in our neighbourhood.”

Rocca’s No Frills played an important role in the life of the community prior to its closing, said Barson.

“This is a real hub for the community, especially the seniors,” she said. “There’s also a big free parking lot.”

Customers looking through the window prior to being let inside were excited about the rebuilt Rocca’s store which is new, brightly lit and spaciously laid out at 18,000 square feet.

“This store is new and clean and it’s very exciting,” said Barson.

Customer Lisa Hodge was also happy to see Rocca’s re-opening after a more than three-year wait for its return.

“It’s very close to me so it’s good that it’s open again,” she said. “It’s caused a lot of problems not having this store open. By the time we’d get to the Carlaw store (on the shuttle), nothing was there that we wanted.”

“It’s nice to be back in the Coxwell community,” Rocca said.

He acknowledged the former store building was old, and he said he was thrilled with the new building.

“The old store was a piece of charcoal. We gave it a shine but it was never a diamond. I give my thanks to Loblaw’s, they built me a diamond. This store is a gem.”

As part of Thursday’s opening ceremony, Rocca’s No Frills donated a giant-sized shopping cart to the Daily Bread Food Bank full of much-needed items such as peanut butter. The first 250 customers on Thursday received gifts from No Frills which included a large re-usable shopping bag, chips, cookies and a No Frills coin on a key chain that could be used to unlock shopping carts instead of the usual loonie.