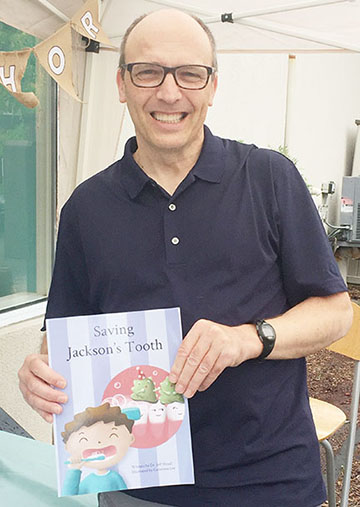 With a busy clinic looking after the teeth of Upper Beach residents for almost 30 years, you wouldn’t have thought local dentist Jeff Shnall would have much spare time, let alone enough to write a book. But, his new children’s book, Saving Jackson’s Tooth, is proof that when it comes to educating kids (and adults!) on the importance of good dental health, time is no obstacle!

We caught up recently with Dr. Shnall for a quick chat at the Ella Minnow bookstore (991 Kingston Rd.) where he was reading from his book.

First things first – tell us a little about your book.

Saving Jackson’s Tooth is a rhyming picture book featuring six-year-old Jackson who has a cavity in his brand new molar. Jackson’s other teeth, who happen to be able to talk to one another, notice the cavity in their new friend and try to get Jackson to see his dentist before it gets too deep. It becomes a race against the clock where the teeth encounter one problem after another in trying to save Jackson’s tooth!

What prompted you to write this book? And why talking teeth?

I felt that there was a need for a book to educate children and their parents about the fact that if a cavity is found, it’s better filled soon, rather than letting it get large and more difficult to treat. In my own practice I’ve had many occasions when I’ve told a parent their child has a cavity, but they didn’t return until months later where it needed more extensive work. Having Jackson’s teeth talk to one another seemed like a fun and engaging way to teach children the importance of keeping their teeth healthy.

How long did the entire process take?

It took about eight months altogether. Once I’d written the story (and edited it down from the original 4,000 words!) I then had to find an illustrator who could accurately depict what the teeth and mouth should look like and allow them time to draw the 23 pictures the book required. I was fortunate enough to find Catherine Lee, a Calgary-based illustrator, who really made the project fun – I was always excited to open an email to see her latest picture. She has a way of drawing that actually had me believing that teeth can talk!

It’s certainly a unique approach! Did you seek any feedback from children while you were writing the book?

Yes – the feedback I got from some of my young patients who read early drafts of the book was one of the most interesting parts of the project. I also was fortunate to be able to have the Grade 8 students of Voice Integrative School in Toronto’s Distillery District critique a draft of the book and, based on the very insightful feedback I received, I made changes to the names of some of the characters, deleted scenes and clarified ideas in the book. It really improved the readability and clarity of the book.

You chose to self-publish. Why was that?

It can be difficult to get a traditional publisher interested in a rhyming story. Self-publishing was a lot of work, but it was a really interesting process. I felt I learned a lot, and am still learning a lot, about how to get a book into the world and, more importantly, into children’s hands.

You’ve obviously enjoyed the whole process – has it inspired you to write another?

I’ve already written the draft to a second book! The same character as the first book, Jackson is getting ready for his first visit to the dentist. The Talking Teeth make another appearance in this book as well and there are a few twists that I think kids (and adults) will like. The book still needs to be illustrated but Catherine Lee is on board with the project. I’m really excited about it – I think it will help parents prepare their children for what to expect when they visit the dentist for the first time.

What’s the main message you hope readers will take from your book?

After getting to know the characters in Saving Jackson’s Tooth I hope that children will feel a new connection to their teeth and will want to take better care of them.

And finally, where can we buy Saving Jackson’s Tooth?

The soft cover book is currently available at Ella Minnow and it is also available online on Amazon in softcover, hardcover and as an e-book. In the next few months I am planning to release a French translation of the same basic story told in Saving Jackson’s Tooth, and there may be a rhyming French version as well.

Details regarding his clinic Beech Dental, located at 350 Beech Ave., can be found at beechdental.com