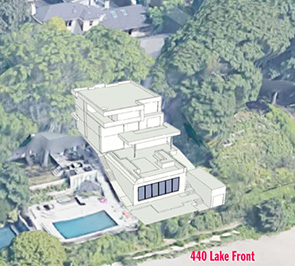 A City of Toronto Committee of Adjustment meeting for variances to existing bylaws for this property at 440 Lake Front (shown here in an artist's conception) is set for the morning of Wednesday, Dec. 4. Inset photo shows the current home on 428 Lake Front as viewed from the beach.

The first step in the Balmy Beach community’s fight against a pair of proposed monster homes in the area was taken at the City of Toronto Committee of Adjustment (COA) meeting earlier this week.

At that Nov. 21 meeting, the COA granted a pair of requests to defer a hearing on variance changes to existing bylaws being sought by the owner for the property at 428 Lake Front. The requests for deferral were made by Beaches-East York Councillor Brad Bradford and the Toronto and Region Conservation Authority (TRCA).

A condition of the deferral granted by the COA was that the owner of the 428 property hold a meeting with area residents within the next three months.

More than 20 area residents had shown up at the COA meeting at Toronto City Hall to state their objections to the plans for the 428 property if the deferral was not granted and the hearing took place that morning. Given the large amount of public interest in the issue, it was the first item dealt with at that day’s COA meeting.

Many Balmy Beach residents feel the two proposed homes, if approved as presented, will forever change the character of the area.

The proposals for the properties at 428 and 440 Lake Front, between Silver Birch Avenue and Nursewood Boulevard, are calling for huge homes on the properties that will dwarf most of the neighbouring structures.

A similar COA hearing is slated to take place on Wednesday, Dec. 4 for the variance changes being sought by the owner of the property at 440 Lake Front. At this point in time, requests for a deferral on the hearing for that property have not been made to the COA.

Both proposals have drawn the ire of the surrounding community for a number of reasons.

Lawyer Dennis Wood of the firm Wood Bull LLP, who are specialists in municipal planning and development law, is representing the neighbours on either side of the property at 428. He is also representing residents in the area objecting to plans for the 440 Lake Front property.

“For the immediate neighbours, the concern is the house is too big and juts out too far towards the lake,” he said of the plans for 428 in an interview with Beach Metro News on Nov. 12.

“It significantly affects the people on either side whether they are in their house or in their yard.”

The same general concerns regarding size of the structure and how much of the property it covered down to the beach were expressed in regards to the property at 440 Lake Front, though the specific numbers do differ regarding the actual plan. Wood said the decision by the COA on Nov. 21 to defer the hearing for the 428 property was the right one.

“It’s the right thing, and the committee condition that the applicants meet with neighbourhood representatives is also an appropriate response to the very large number of residents in the community that have indicated opposition to this proposal,” Wood told Beach Metro News immediately following the Nov. 21 COA meeting.

One of the main drivers behind the granting of the deferral was the change in position by the TRCA regarding shoreline hazard flooding issues. Earlier this year, the TRCA had said it was removing a prior shoreline hazard restriction in the area which had previously limited how close to the lot line on the beach that a building structure could be erected.

In the past, the TRCA had called for a mandatory beachfront setback for houses in the area given past flooding concerns.

Community members had asked Councillor Bradford for help on the issue, and his office requested that the TRCA take another look at its position on shoreline hazard regarding the 428 property prior to the COA hearing.

“Community residents came to us on it and we took a closer look,” said Bradford of he and his staff. “The property encroaches on the land the TRCA considers a shoreline hazard and we asked TRCA to take another look and they agreed it needed to be looked at again.”

Given that there was now a TRCA shoreline encroachment issue with the 428 plan, Bradford said it “clearly called” for a deferral at the COA meeting.

The properties at 428 and 440 are among some the rarest, most unique and potentially most valuable in the City of Toronto.

Most of the 16 properties that actually front on to the lake along Balmy Beach are built on the table land and sit above a small bluff that slopes down to the beach itself. The properties include land below the bluff, and with the exception of some swimming pools do not have buildings on them.

“This is a very important and unique area. That’s what makes it valuable real estate, and every new applicant is pushing the envelope on what will be permitted,” said Wood. “That’s what is happening here in this case.”

Concern regarding protection of the bluff east of Silver Birch Avenue was cited by opponents of the plans for both 428 and 440, along with the impacts to the character of the community and public enjoyment of the beach.

Wood said the decision by the COA regarding the 428 application does not necessarily mean the same one will be made at the Dec. 4 hearing for the 440 application for existing bylaw variances to be granted.

“One cannot draw any conclusions with regard to the next hearing based on this one,” he said, especially since TRCA has not reversed its position regarding the 440 property and shoreline hazards as of this time.

Bradford is hoping, however, that the applicants for the 440 property will take heed of the COA’s call for the 428 owners to meet with the community and do the same.

While there is not a TRCA call for deferral on the 440 COA hearing on Dec. 4, Bradford said,  “there’s enough feedback from the community in opposition and I would expect the committee to also ask the applicant to work together with the community.”

“On 440, I’m encouraging the applicant to meet with the community and work towards a resolution,” he said as it will lead to a much better outcome for all involved.

Bradford said protecting beachfront character should be among the top priorities regarding both proposals.

“I think it’s very important to preserve the shoreline and beach area for members of the public. It’s one of the things that makes our area so special. I don’t want to see private spaces encroaching into the public spaces,” he said. “We want setbacks that protect the beachfront character.”

Wood said that his clients realize something will be built on the properties at 428 and 440 and are not opposed to that, but it is the sheer size of the current proposals that has them objecting. Wood said they would be open to “reasonable” applications.

Bradford added that property owners have the right to build on their properties, but need to do so in a way that is respectful to immediate neighbours and the community as a whole.

“There are a lot of big proposals and people can have houses there, but we have guidelines and rules for what is appropriate and conforms with the neighbourhood.”

While the future of what the Balmy Beach area at the lake will look like is at stake with these proposals at 428 and 440 Lake Front, it is not elected councillors who will make the final decision on whether approval is given.

The Committee of Adjustment is made up of non-elected officials who will either approve or deny the many requested variance changes being sought by the applicants for these homes. Whichever way the Committee rules, the losing side will then have the option of going to the Toronto Local Appeal Body (TLAB) which is the local replacement for the former Ontario Municipal Board. The TLAB, which runs in a similar manner to the way the OMB did, is also made up of non-elected officials who will ultimately rule in favour of the applicant or those opposed to the plan.

The Dec. 4 Committee of Adjustment meeting regarding the proposal for the 440 Lake Front property is on Wednesday, Dec. 4 at 1:30 p.m. in Committee Room 2 at Toronto City Hall, 100 Queen St. W. The meeting is open to the public to attend and make comments at.

Those wishing to comment specifically on the proposal for 440 Lake Front can also send an email to Adam Wills in the city’s planning department at Adam.Wills@toronto.ca

For more information on the Dec. 4 meeting, please contact the Toronto and East York Committee of Adjustment at 416-392-0413.

For more on this issue, please see our earlier story at https://beachmetro.com/2019/11/13/proposals-for-pair-of-monster-homes-on-the-waterfront-in-balmy-beach-have-residents-concerned/