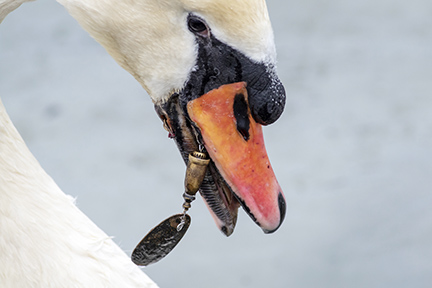 A Mute swan with a fishing hook in its mouth. The swan was in care for a number of weeks while it healed from the injury. Photo by Ann Brokelman.

In this article, I’d like to bring up the dangers of fishing line, sports netting, and other loose garbage to our local wildlife.

The first question that comes up is usually: is this stuff really that dangerous/problematic? Does the media just take one or two bad pictures every year and make it seem like this is a constant problem?

Well, I talked to the Toronto Wildlife Centre; the people who rescue GTA animals year-round. They told me that, “Fishing line poses many threats to wildlife, especially waterfowl. They risk ingesting and becoming entangled in discarded lines, often suffering injuries from fishing hooks and lures that are still attached. These injuries can easily be prevented. Refrain from cutting fishing line that has become snagged, and make sure to properly dispose of it in monofilament recycling bins often located in fishing areas and tackle shops. Also, make sure to cut up lines into smaller pieces, and never use lead sinkers that can cause lead poisoning. To find out more, please visit torontowildlifecentre.com or call our wildlife hotline at 416-631-0662.

“Consider storing sports netting when not in use. While it’s not often that animals become entangled in goalie nets, it does still happen.

“A Virginia opossum, red-tailed hawk and a red fox have all previously been admitted to TWC this year suffering injuries after being caught in soccer and hockey nets. It’s always better to be safe when considering our wild neighbours, and it takes little effort to store away unused equipment.”

Over the years I have seen how the above affects our wildlife.

In one instance a beautiful adult red-tailed hawk was caught in an old hockey net.

She was saved by Toronto Wildlife Centre’s Rescue team member Sara, and she was suffering from minor lacerations and bruising, but with care at TWC, she was able to be released back to the wild within a week.

This was a happy story – she was able to return to her nearby nest, where her juvenile hawks waited for her return.

A few years ago I also got a call from the Toronto Wildlife Centre to check out a striped skunk trapped in a different net.

It was a very smelly rescue with Sara and another volunteer Jeremy. Sara took the rear end of skunk, Jeremy the front, and I cut the net. We placed it in a crate and Jeremy took it to the wildlife centre.

The skunk was assessed by the senior wildlife rehabilitation staff, the last of netting was cut away, and it was released without much delay. This was another lucky, and smelly victory, but not all animals are that lucky.

Enjoy fishing, but please take all of your broken lines, hooks and sinkers home. Also, please use steel sinkers instead of lead. I know it’s not always easy to recover a lure that’s snagged on a log or in the rocks, but I’m asking you to maybe go a little further next time to do what you can to recover your tackle.

I’ve now lost track of the number of animals, specifically geese, ducks, grebes, herons, loons and swans tangled in fishing lines and/or with hooks in their mouths/beaks.

I particularly remember one beautiful swan (see the photo with this column) with a huge hook in his mouth. While TWC was able to carry out a successful rescue, the bird was in care for a few weeks to let a very preventable injury heal.

Can individual action even make a difference? I can’t see how it could hurt, and I see lots of opportunities to make our city a little better for us and for the animals we share it with.

But, what is our responsibility with these sorts of items? If you want me to try to guilt trip you a little, the government of Canada states that “Every citizen has a role to play in avoiding waste and pollution while protecting Canada’s natural, cultural and architectural heritage for future generations.” (www.canada.ca/en).

Let’s think of our animal neighbours, our city, and the kind of environment we want to leave behind for future generations to enjoy.