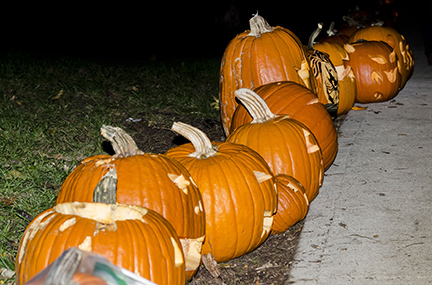 Local residents will have lots of opportunities to dispose of their Halloween jack-o-lanterns in fun and environmentally-friendly ways as Pumpkin Parades are planned for a number of area parks on the evening of Friday, Nov. 1.

Pumpkin Parades give residents one more chance to display their lit jack-o-lanterns prior to disposal. People are invited to attend the local parks, and set their pumpkins up for a final viewing by neighbourhood residents.

The colurful events often draw large crowds out to the parks to the view the pumpkin carvings.

The City of Toronto provides compost disposal bins at the parks and once the Pumpkin Parades are finished, residents can drop off their pumpkins (after removing the candles) into the bins.

Most of the parades take place between approximately 6 p.m. and 9 p.m.