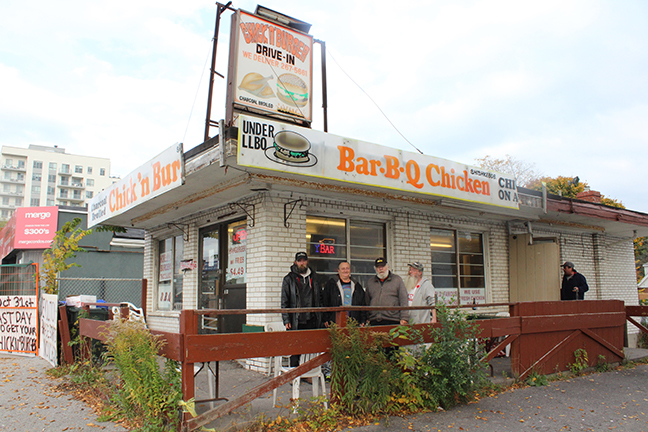 Cliffside will say goodbye to one of its most famous, or maybe the word is infamous, restaurants on Halloween day.

The Chick ’n Burger, which has stood on the crest of the hill on the south side of Kingston Road just west of Cliffside Drive for some 55 years, has its last day of business on Oct. 31. It’s being torn down for a condo development.

I have driven past this place literally thousands of times, as I’m sure others have, and I’ll admit the thought of ever going inside had never even remotely crossed my mind.

But the hand-painted signs saying the last day of business was Oct. 31 and that the demo would start the next day, made me think I needed a closer look at this piece of Scarborough history before it was gone for good.

Let’s be honest, from the outside the place is kind of scary. I wasn’t even sure about the name as half the sign on the front has been gone for who knows how long. However, I can now assure you the restaurant’s actual name is not Chick ’n Bur.

I can also say you have nothing to fear. I went in for you and I survived. I left with a smile on my face, having learned a valuable little Scarborough history lesson.

The regulars were sitting out on the patio enjoying what was a lovely Tuesday afternoon in late October, and everyone was as friendly as could be.

“About time somebody did a story on this place,” said customer Eric, who kindly offered to buy me a beer.

I unfortunately had to say no, but that helped get the five or so customers on the patio talking a bit.

The Chick ’n Burger opened in 1964 and was, so I’m told, famous for years for – you guessed it – chicken burgers.

It was first run by two men of Greek descent, believed to have been named George and Nick. “It was the best chicken burger there was,” said Eric. “The Chick ’n Burger was one of the best places in Toronto.”

Its heyday seems to have been the 1960s through to the mid-1970s. That was perhaps in part to its proximity to another well-known Scarborough establishment – The White Castle Inn.

Now I’ve heard of The White Castle Inn, but don’t really know much about it. Some research tells me it stood on the south side of Kingston Road east of Glen Everest Road near where Rosetta McClain Gardens are now.

Though further research shows me there was a White Castle Hotel at 2121 Kingston Rd. (at the junction of Hwys. 2 and 5 according to the matchbook) with 25 modern rooms, banquet facilities and the Castle Lounge. All of which is giving me a fuzzy 1980s flashback to what may or may not have been the Top of the Bluffs hotel, but I digress…

Back in the those heydays, Chick ’n Burger closed at 3 a.m. and opened at 5 a.m., and was a go-to spot for hungry customers from the White Castle after last call.

“When the White Castle was open, this was the last stop of the night,” said Eric, who has been a Chick ’n Burger customer since 1975.

He remembered when there were juke boxes on the wall (“Three songs for a quarter.”) and a dozen chickens cooking at one time in the two rotisseries

“This really used to be a top-notch place,” said Eric. “We’re sorry to see it close. There’s already too many condos here and they’re too expensive.”

On the patio, Bob Marlow said he not only grew up going to Chick ’n Burger but also worked as a doorman at the White Castle from 1973 to 1976.

“I’ve been coming here since 1964 when it opened,” Bob remembered. “I had my first ever chicken burger here when I was eight years old.”

Customer Corinna Neviles once worked at the restaurant as a cleaner, and said it is a special place for its group of regulars who would celebrate birthdays and other events at Chick ’n Burger.

She’s also not looking forward to the condo construction as she lives nearby. Phillip Penney is another regular at Chick ’n Burger. “I’ve been coming here since 1975, as soon as I arrived from The Rock (Newfoundland). They call me the Codfather.”

He agreed the place has special spot in the hearts of its long-time customers. “We’ve had Christmas parties and turkey dinners here.”

Marlow and Neviles both acknowledged that from the outside the Chick ’n Burger could be a bit intimidating.

“People who know nothing about it say it has a bad reputation, but it’s nothing like that at all. It’s all good people and friends meeting here.”

The restaurant has gone through a number of owners since it opened, including the Lins who present owner Michael took the lease over from about five years ago.

Michael is not happy the building is being torn down, but the lease is up and there’s nothing he can do about it.

What he is happy to say is that though the Chick ’n Burger on the south side of Kingston Road may be history, it will be rising again on the north side of the road a little bit further east.

Michael is moving the restaurant to the site of the former Belfast and Dog House taverns at 2256 Kingston Rd., and will be naming the new location Chick ’n Burger.

There are even plans to save some of the old signs from the original building.

“The reason I got the other place is I want to keep my old customers,” said Michael. “This is a very unique place, you really can’t find too many places like this. The customers need this place, it is their second home.”