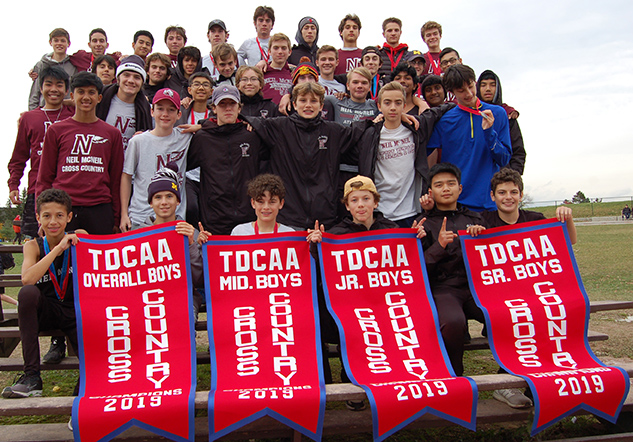 Cross-country runners from Neil McNeil Catholic High School celebrate after winning the overall boys team title, and the Midget, Junior and Senior crowns as well, at the Toronto District Catholic (Colleges) Athletic Association championships last Friday at Centennial Park in Etobicoke. All three teams have qualified for the Ontario Federation of School Athletic Association (OFSAA) championships set for this Saturday, Nov. 2, in Sudbury.

Adding to the accomplishment was that for the first time in history, Neil McNeil won all three age group divisions (Midget, Junior and Senior) as well as the overall team title at the city championship meet which was held in Etobicoke’s Centennial Park on Friday, Oct. 25.

As a result of the perfect record at the city championships, Neil McNeil also qualified its Midget, Junior and Senior boys teams for the Ontario Federation of School Athletic Associations (OFSAA) cross-country championships which will take place on Saturday, Nov. 2 in Sudbury.

In the Junior division, Neil McNeil won by an impressive 39 points over Michael Power. The top four Junior runners for the Maroons in the race were Liam McCullagh, who finished first; Liam Patterson, who finished second; Aidan Miller, who finished sixth; and Owen Phillips-Grange, who finished 10th.

The Senior division was a battle for the Maroons to win as the top four teams were separated by only two points. In cross country, the team with the lowest point total is the winner as it reflects the place the team’s runners finish in. The Neil McNeil Seniors were tops with 40 points, followed by Chaminade College and Bishop Allen, both with 41 points, and then Father John Redmond with 42 points.