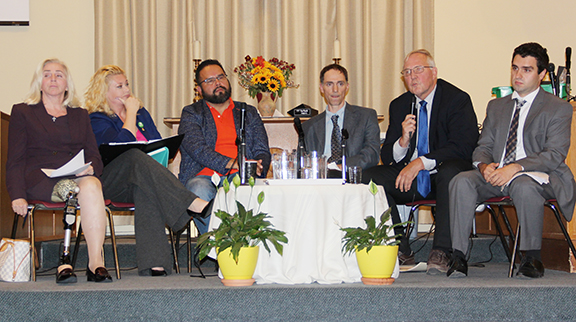 Scarborough Southwest candidates in this month’s federal election came together on Tuesday, Oct. 8, for a debate at St. Paul’s United Church. The main topics discussed ranged from handguns, climate change, the federal deficit and Indigenous issues.

After opening remarks, the debate commenced with a question submitted by the East Beach Community Association regarding the candidates’ policies on handguns, and whether they would opt for a national or municipal ban.

Conservative candidate Kimberly Fawcett Smith said that she will tackle the high recidivism rates of handgun offenders by focussing on gangs who commit violent crimes.

“The issue is beyond handguns,” she said, adding that she will address the “root causes” of gun violence by providing community-based resources supporting individuals to choose an alternate life path that doesn’t involve violent crime.

Green Party candidate Amada Cain, disagreed with Fawcett Smith, promising that she would call for a full national handgun ban.

“Handguns are only made to kill people,” she said.

Blair promised an all-out ban on assault rifles, along with stricter handgun storage regulations referencing the Danforth shooter used a stolen gun to carry out an attack that killed two people and injured 13 last summer. He also said that he will invest $250 million on youth-focused programs.

People’s Party of Canada candidate Italo Eratostene, is against a handgun ban stating, “It is wrong to punish people who have done nothing wrong.”

He does, however, promise to focus on border control to prevent the sale of illegal handguns.

“I can’t see any reason for anyone to own a handgun or an automatic weapon,” NDP candidate Keith McCrady said.

He promises to take a holistic approach by addressing poverty, homelessness, violence and childhood abuse, which he believes leads to youth reaching for a handgun in desperate times.

Simon Luisi, from the Animal Protection Party of Canada said a national handgun ban is a “no-brainer”.

With new technology, such as 3D printers to manufacture handguns, they’re becoming easier to get a hold of, Luisi said. He added that he will find ways to deal with the source of violence to prevent handgun violence from occurring.

On the topic of climate change, each candidate shared their philosophy on the issue and how they plan to address it.

“We have done a great deal, but we’ve not done enough,” said Blair, speaking of his efforts to mitigate the effects of climate change during his tenure.

He stated his track record of providing funds to hit their target of having 90 percent of energy coming from clean electricity by 2030, and “putting a price on carbon so that it is no longer free to pollute in Canada.”

The carbon pricing money, he said, will go back into the pockets of Canadians.

Luisi said that his party plans to impose tariffs on goods coming from nations that do not have carbon pricing. He also said that they will end subsidies to the oil and gas companies and halt the construction of new pipelines.

“We have to respect our relationship with the earth,” he said.

Cain had a similar view but went further. “We are facing an extinction-level event in the next 80 years,” she said, citing her party’s 20-point plan called “Mission Possible.”

She said that international action and cooperation is critical, adding that they are not a “one-issue party,” but looks at policy through a “green lens.”

“It’s not that Canada does not know how to meet its accord targets, it is that we have been told that our technology is not wanted or welcomed by any of the parties,” she said.

Eratostene said that he will focus on the “smaller issues” of climate change, such as the preservation of national parks, citing that Canada is not a significant emitter of carbon on a global scale.

One resident asked how the candidates plan to eliminate the national deficit.

Blair said that the Conservative party, under Harper and Mulroney, have historically incurred the most debt. He added that during his tenure, the GDP has steadily grown, and the national debt has continued to fall. His party, he said, plans to create more jobs and further reduce poverty.

Fawcett Smith responded, arguing that the Liberals have never balanced the budget, which was met by applause from the audience. The Conservative’s priority, she said, is to balance the budget and reallocate funds that will make life more affordable for Canadians.

Cain said that the Green Party has a costed five-year plan to erase the federal debt, which includes eliminating all fossil fuel and corporate welfare subsidies. She also said they will “go after offshore tax havens [that is] taking money out of the economy and not putting it back in.”

Eratostene promises to eliminate the deficit in two years by cutting foreign aid and corporate welfare, citing that these programs “do not affect the average Canadian.”

Luisi introduced the idea of the “environmental deficit.” He plans to end tackle corporations that, “make money at the expense of the environment.”

While discussing Indigenous reconciliation, McCrady promised to be the relentless voice for Indigenous Peoples, but stressed that more Indigenous voices, like his, is needed in politics.

Cain agreed that more Indigenous representation is needed, stating reconciliation is one of the founding principles of the Green Party.

Her platform, she said, offers a “full-gamut” of Indigenous reconciliation, which includes funding for healthcare, education, skills-training, economic development and a commitment to ensure the funding of water systems stays in the community, not in corporations.

Blair said that Indigenous reconciliation remains a priority and that it’s one of the Liberal Party’s most important responsibilities.

Blair said that there’s much more to do, but he took “some comfort” when Grand Chief Perry Bellegarde said that the Liberals have done more for the Indigenous community in four years than in the last 50 years.

Fawcett Smith said that the cancellation of the Northern Gateway pipeline and the five-year moratorium of oil extraction from the Arctic has created “endless barriers” to economic development in the Indigenous community.

She continued, stressing economic development is key for effective reconciliation. She also promised to address the “bureaucratic red tape” surrounding the inquiry on Missing and Murdered Indigenous Women.

Eratostene said that his party’s main platform is the keep Canadian tax dollars in Canada, which includes funding for Indigenous Peoples. He also promised to repeal the “outdated” Indian Act.

The Scarborough Southwest federal candidates’ debate was held at St. Paul’s United Church on Tuesday, October 8th from 7:30 p.m. to 9:30 p.m. It was hosted by the East Beach Community Association and moderated by the association’s president, Alan Burke. With the exception of the question on handgun bans, all questions were submitted by the residents in attendance and drawn randomly.