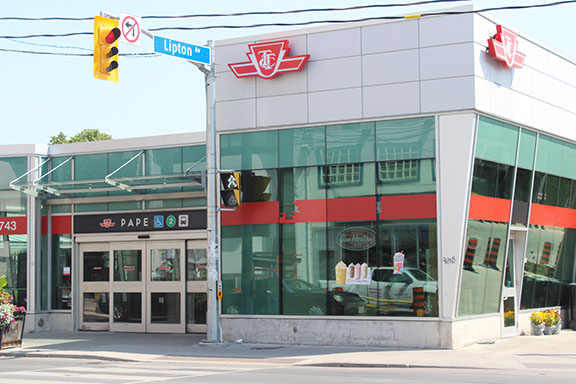 Pape Station will be one of the stops on the proposed Ontario Line.

An organizing meeting for residents who wish to become involved in speaking up about the proposed Ontario Line subway route through East Toronto is being organized by Toronto-Danforth Councillor Paula Fletcher and Toronto-Danforth MPP Peter Tabuns.

The meeting will focus on the line’s route between Eastern Avenue and Gerrard Street East.

Those attending the meeting can find out more about upcoming requests to Toronto Council this month regarding what the city can ask the Province of Ontario regarding the planned transit line.

Local residents who want to voice their opinions on the Ontario Line will find out info about the City of Toronto’s Executive Committee meeting on Oct. 23 and the Toronto Council meeting on Oct. 29 at which the line will be discussed.

The Ontario Line is the provincial government’s proposed replacement of the planned Downtown Relief Line.

The 15.5-kilometre route of the provincial proposal extends the length of the Downtown Relief Line’s route both north and west, and also deviates on the path it will take through East Toronto. The Ontario Line would run on only three kilometres of the city’s proposed 7.4-kilometre relief line.

The relief line was supposed be completely tunneled and start at Pape Station from which it would head south to Eastern Avenue, then veer west until connecting with Queen and Osgoode stations.

However, the proposed Ontario Line would start at the Ontario Science Centre above ground and head south, going underground starting at the DVP, and connect with Pape Station.

The Ontario Line would then continue south and start to go above ground around Gerrard Street East and roughly follow the existing Lakeshore East GO train rails before returning underground, veering slightly north through Corktown to Sherbourne, then heading west towards Queen and Osgoode stations.

From there, it would extend further west to Queen Street West and Spadina Avenue, before heading south to Bathurst Street and King Street West, and finally stopping at Exhibition Place.