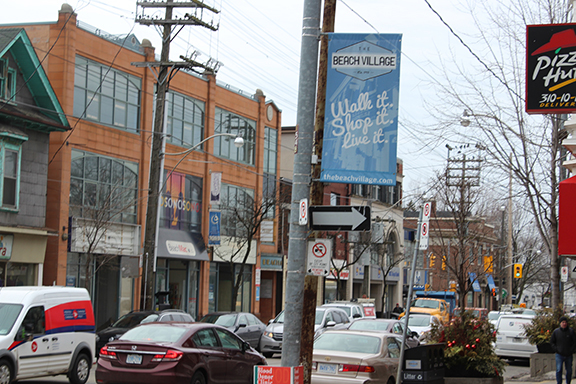 Queen Street East in the Beach is part of the area to be covered by the Queen Street Rapid Removal Towing Pilot which will focus on quickly removing illegally parked cars during the afternoon rush hour. The pilot project begins on Monday, Oct. 7.

Those who park illegally on Queen Street East during afternoon rush hour could find their cars towed and moved to nearby side streets starting this Monday, Oct. 7.

“The sooner we can get those vehicles moved, and get others on their way, the better. I look forward to seeing the results of this pilot and I’m confident it will help us in our ongoing efforts to combat congestion on Queen Street and on other busy routes in Toronto.”

The pilot project will last for approximately six weeks and will see tow trucks quickly remove illegally parked cars along the entire length of Queen Street across Toronto from Fallingbrook Road in the east to Roncesvalles Avenue in the west.

It is hoped this will increase the number of illegally parked cars removed as tow trucks will not have to take the vehicles to impound yards located outside of the area. It’s estimated it takes as long as 90 minutes for a tow truck to hook up a car, take it to an outlying impound yard and then return to get the next vehicle.

This pilot project is expected to see the volume of cars removed increase significantly since they will only be towed a short distance away, and ultimately see less delays on Queen Street for drivers and those taking transit.

Drivers who are towed will get a parking ticket but will not have to pay an impound fee and the towing charge will also be waived.

In the downtown core, a number of side streets as been identified as locations where towed cars will be taken.

In the Queen Street East area through the Beach, exact locations of where towed vehicles will be taken has not been finalized.

“The tow trucks will have to cognizant of where they are taking the cars and what side of the street they are being put on,” said Beaches-East York Councillor Brad Bradford in an interview with Beach Metro News on Friday afternoon.

Those who have been towed will be able to find out where their vehicle has been moved to by calling Toronto police’s non-emergency number at 416-808-2222.

“One illegally parked car can really cause huge delays for streetcars and cars,” he said. “The aim is to effectively move more people.”

According to the city, almost 11,000 parking/stopping violations were issued and approximately 2,400 vehicles were towed during the rush hour period on Queen Street in 2018.

Police identified the afternoon rush period on Queen Street as particularly challenging due to cars parking and stopping illegally. Each day, approximately 45 tickets are written and 10 vehicles are towed on Queen Street, the city said.

If the pilot proves successful, the city and police will examine opportunities to run this program during morning and afternoon rush hour periods on other routes.

Feedback and data gathered from the pilot may also inform future congestion strategies, including updates to the City of Toronto’s Congestion Management Plan.