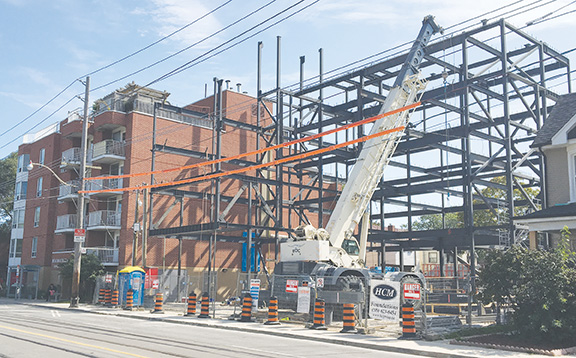 WoodGreen Community Housing is building this 35-unit building to provide affordable housing for seniors on Gerrard Street East. Committed government support for such projects is a key part of a national housing strategy and should be considered a key federal election issue, say those who see the need for affordable housing growing in Toronto. Photo by Alan Shackleton.

As the federal election draws closer, the issue of affordable housing in Toronto remains a prominent talking point among Toronto politicians.

The capital plan will be based on need; buildings in most need of repair will be tended to first.

“Along with ongoing support from the City of Toronto, this funding will enable us to improve living conditions, safety, accessibility, and comfort for tens of thousands of tenants, improve energy efficiency and avoid having to permanently close units,” said Malloch.

About 89 per cent of Toronto Community Housing tenants pay rent-to-geared-income, which means they do not pay market rent. Instead, they pay 30 per cent of their gross income.

Although helpful for low-income families, there is a long wait list for this type of housing.

Right now, there are more than 100,000 applications active on the waitlist for subsidized housing according to the City of Toronto website.

Mwarigha, vice president of housing, homelessness and new development at WoodGreen Community Services, said that the federal government has already rolled out important plans for housing through the National Housing Strategy (NHS).

“One of them (plans) is to build new affordable housing and the other is to continue the renovations and long-term restoration of the existing stock that has been under stress in the last several years,” said Mwarigha.

“The federal government also began an initiative that will provide support and profitability in the non-profit sector, specifically to improve social finance and capacity building for funding of change,” he said.

Mwarigha said that these initiatives have launched in recent years and have not quite come together yet.

“Once they come together…(they will) provide fresh breath into a problem that has been sort of neglected in the last 20 years,” he said.

“One of the key complexities about the homelessness issue is that it’s connected to a whole bunch of other sectors,” said Mwarigha.

“It’s connected to the income stream, the amount of money that people are provided through social assistance and other kinds of benefits, and the fact that amount of money particularly falls short when people are trying to rent in a very hot and inflated market.”

Mwarigha said that the affordability outcome the programs put out is crucial.

“We’re not quite there yet. In Toronto, it’s very complicated, because the construction of new housing makes it very difficult to deliver an affordability program,” he said.

He said that there needs to be better connectivity between different programs in the different levels of government.

He said that the federal, provincial and municipal governments are “often sometimes not on the same page.”
“The ground that really suffers (from the disconnect) is that place of trying to support homeless people.”

The issue of homelessness in Toronto has remained a devastating social problem in the city for many years.

Mark Aston, the executive director of Convenant House and the chair of the Toronto Alliance to End Homelessness, said that homelessness is the worst symptom of a lack of affordable housing.

There are also quasi-permanent 24-hour respite centres around the city that have about 100 shelter beds in each of them.

“They’re a response to the fact that the shelter system can’t handle the demand at this point. Overall I would say the situation is very bad. We’ve got probably 8,500 to 9,000 people homeless every night now in the city.”

Aston said that there are structural, systemic, and individual factors that lead to homelessness in the city.

For example, Individual factors could encompass a youth alienated at home, a systemic factor may be children leaving the welfare system with nowhere to go, and structural factors involve big issues like shifting economy, people not being able to afford rent, and a lack of affordable housing.

“I think the only way we’re going to change direction is with the engagement of the whole community, making homelessness or ending homelessness a matter of civic pride. But also, some really good policy from all levels of government,” said Aston.

Aston suggests that whatever government is in power after the federal election needs to commit to maintaining federal leadership, and needs to invest in affordable housing and homelessness services.

“Long-term reliable funding is required to end homelessness, it’s also required in community housing in Toronto and across Canada as well,” he said. “We need a continuation of the work the Liberals have done.”

Aston also said that an important part of the NHS is a right to housing and that in terms of housing policy, priority must be given to the most vulnerable people and those in the greatest need of housing.

“What it’s doing is recognizing homelessness as a violation of human rights, and committing to addressing the situation,” he said.

Aston said that he would love to see a supportive housing construction fund, focused on the needs of all people experiencing homelessness.

He also suggested that the government must fund a proper rural and urban Indigenous housing strategy.
“Indigenous people in our country have not been well served in terms of housing and support services. And as a result, they’re very over represented in the homeless population of our country,” he said.

In general, Aston said that the current government has taken good initial steps in terms of housing and homelessness in Toronto, but that more is needed.

He also said that everyone living in Canada should be concerned about the position of the government that comes into power on these issues.

“We need a government in Ottawa that is going to engage strongly and proactively, and really put its resources and its influence and weight behind creating and implementing a vibrant National Housing Strategy,” said Aston.

“We need to see this work continued on. If a new government weren’t to continue this work, I think it would be an absolute disaster for this country.”