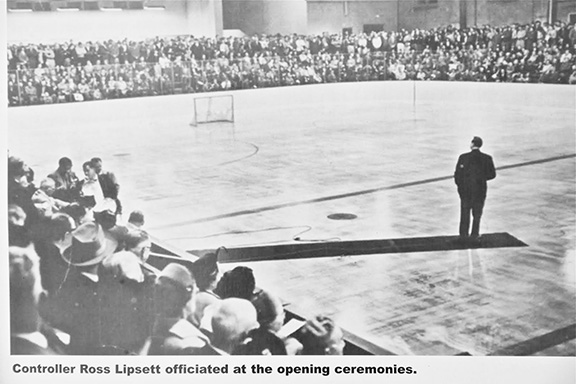 This photo from the archives shows Councillor Ross Lipsett at the opening of Ted Reeve Arena in October of 1954. Ted Reeve Hockey Association celebrates its 65th anniversary this weekend.

The Ted Reeve Hockey Association celebrates its 65th year with on-ice and off-ice activities this weekend.

The fun gets underway on Friday, Oct. 4, with an Alumni Night at the Balmy Beach Club. It goes from 7 p.m. to midnight at the club, 360 Lake Front. Former players, coaches, volunteers and parents are invited to look back on 65 years of hockey in the community. To order tickets, please visit www.tedreevehockey.com

Maggie Ahlbrand, with Ted Reeve hockey, said the club is “super excited” to be celebrating its 65th season.

An official ceremony featuring a piper and speeches is set for approximately 2:30 p.m. on Saturday at the rink.

There will be hockey skills competitions and showcases on the ice, a collection of gently used equipment for donation, and activities off the ice including facepainting, balloons and a barbecue.

There will also be a puck toss for prizes from 4 to 4:30 p.m. in the rink, and this will be followed by three-on-three tournament until 8:30 p.m.

Ahlbrand said that along with providing hockey for generations of kids, the Ted Reeve Hockey Association has also served as a centre for the community over the past seven decades.

“People really feel proud to belong to this organization,” she said. “We have generations of families who support us.”

Ted Reeve hockey has run for 65 years a non-profit organization supported by its volunteers.

“We are very proud of that fact,” said Ahlbrand.

Community support has always been at the core of Ted Reeve hockey, and that goes right back to the campaign to get the rink built which began in the early 1950s.

For more information on this weekend’s 65th anniversary celebrations, including a full schedule of events, please visit www.tedreevehockey.com