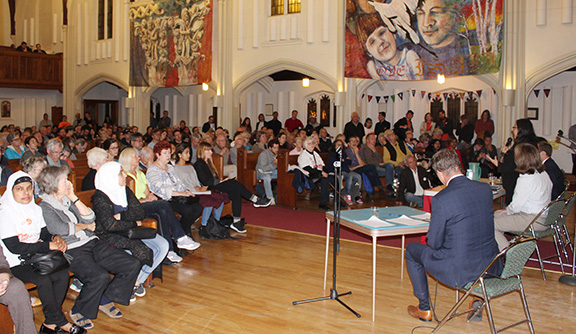 Kingston Road United Church was filled with residents to hear a Candidates Debate for the Beaches-East York riding on Monday, Sept. 30. Photo by Alan Shackleton.

A federal Candidates Debate for the Beaches-East York riding on Monday, Sept. 30, night at Kingston Road United Church had three new candidates challenging Liberal incumbent Nathaniel Erskine-Smith, and all but one candidate cited climate change as their top priority.

Deborah McKenzie, who represents the People’s Party of Canada, a new party that was formed by Maxime Bernier in 2018, said that she is not a climate-change denier, but does not believe human activity to be the main factor causing climate change, citing news outlets do not cover scientists that align with her view.

When asked by moderator Alan Carter of Global News if she agreed with Bernier’s statements that Greta Thunberg, a 16-year-old Swede who started a worldwide student-strike against climate change, was mentally unstable, McKenzie said that it was “something that she herself and her parents have talked about,” which was met by loud boos and cries of “shame” from the crowd.

McKenzie did not back down from the reaction, insisting that she had the right to speak. She finished by explaining that Thunberg is so popular because “she has managed to overcome her difficulties.”

On climate change policy, McKenzie stated that she will support pipelines across Canada in order to sever the country’s reliance on Middle Eastern oil.

Sean Manners, candidate for the Green Party, disagreed with McKenzie’s position. He said he aims to create a country that is not reliant on oil and gas.

“Climate change represents the largest existential threat to our existence that we’ve ever seen,” Manners said, citing the Intergovernmental Panel on Climate Change.

He promised to reduce carbon emissions to 60 per cent by 2030 and to net zero by 2050. He also plans to make “massive” investments in infrastructure for walking and cycling, along with creating natural barriers in the Beach area to prevent flooding.

NDP candidate Mae J. Nam said “No” to the “status-quo of continuing to fund oil and gas and a pipeline.”

Nam explained that the pipeline is a weak investment that’s been tied up in years of litigation, and that Canada needs to “turn our minds to seeing this as an opportunity.”

Nam promised that she will say “No” to investments from polluting corporations, while jumpstarting investments in electric cars, public transit and cycling infrastructure.

Erskine-Smith laid out his track-record on climate change through his promise to ban single-use plastics, investing in protection for the waterfront, and decreasing projected 2030 carbon emissions from 850 to 600 megatonnes.

“This is the first government in my lifetime that has taken this issue seriously and has moved the needle,” he said.

On the issue of caucus solidarity, tension in the room was palpable when Erskine-Smith was asked by Carter if he agreed with Prime Minister Justin Trudeau’s decision to eject Jody Wilson-Raybould and Jane Philpott from the Liberal caucus.

Erskine-Smith said that while he fundamentally disagrees with the Prime Minister’s decision, he understands his actions. Erskine-Smith pointed out that he has disagreed with his own party 37 times.

“It’s the way that we go about disagreeing that really matters in our democracy. Tearing each other down, questioning people’s integrity, personal attacks, it pulls all of democracy down with it,” he said.

“My colleagues were of firm view that Wilson-Raybould was pulling the whole party down, along with the Prime Minister and making it very personal and about his character,” Erskine explained.

On the issue of disagreeing with their leader on a policy, Manners said that in the Green Party MPs would be free to vote their conscience on most issues.  “The only thing that might be a sure-fire bet to get you expelled is not supporting full abortion rights,” said Manners.

Immigration also proved to be a contentious topic at Monday night’s meeting.

On housing policy, McKenzie stated that the housing problem in Beaches—East York is caused by a low supply and high demand of housing. She said the People’s Party would curb immigration to preserve the resources in place, decrease demand, and improve the chances of success for new immigrants.

That statement was met with loud shouting, and a mix of boos and applause on both sides of the issue.

Nam aims to curtail investments in pipelines and corporate polluters into more funding for affordable housing, while Manners said that the Green Party recognizes housing as a human right.

Erskine-Smith said that more needed to be done at the federal level but listed his party’s accomplishments, such as increased funding for homeless initiatives, a national housing co-investment fund and a national housing benefit that citizens can take with them to other cities.

The issue of a national handgun ban was also discussed.

Nam stated that municipalities are best placed to make their own regulations, but Erskine-Smith called for stronger national leadership on handgun bans, arguing that people will simply go to another city to buy a handgun.

Nam said the NDP’s policy on handguns is connected to social and economic justice. She said her party intends to tackle poverty and social determinants which are the root of gun violence. Nam promised a $100 million investment over five years on youth and community programming, along with accelerating construction of affordable housing to address those roots.

“I’m extremely proud that our party does not waver on this at all, we would ban handguns for sure”, Manners said, which was met with resounding applause.

McKenzie argued that Manner’s answer was enough for a “very complex issue”. On the whole, she said that her party will err on the side of liberty and allow people to have their guns.

On the topic of transit, Erskine-Smith cited his track record during his tenure. He stated that the Liberals will remain a “strong, stable funding partner” and their party has made “historical investments, more than any federal government for the TTC and downtown relief line”.

Manners stated that the federal government needs to diversify their investments in other transportation models such as national infrastructure and a city-charter, along with collaborating with levels of governments to rectify the “horrible” situation with the TTC.

Nam promised to make “massive” investments in a national biking strategy, along with public transit, potentially making it free for all citizens. “We really need to get out of our gas-guzzling cars,” she said.

McKenzie is against free transit for children under 12 and is looking at shifting that investment to seniors, but overall, she said that transit is best handled by municipalities.

Registered candidates from the five main parties were contacted to participate in the debate and Conservative candidate, Nadirah Nazeer declined, citing a schedule conflict.

A number of the questions asked at the debate had been submitted to Beach Metro News to give to the moderator to ask in advance of the event.