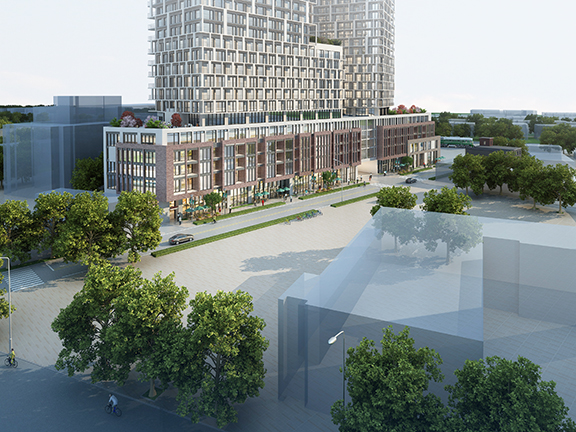 A conceptual image for one of the towers proposed for the east side of Dawes Road, south of Danforth Avenue. Image: Submitted.

The City of Toronto recently held a community consultation meeting in response to the application for a new residential development 9 and 25 Dawes Rd., and many residents in attendance at that meeting voiced their concern over the proposed building heights.

In the development proposal, a pair of towers, at 24 and 30 storeys apiece, are sitting atop a shared five-storey platform. The towers would contain a combined total 684 residential units, while the podium would consist of a mixed-use space, slated for retail shops and community services. The full development would span approximately 5000 square metres, complete with surrounding greenspaces.

Currently, the bylaw permits a maximum height of 12 metres for new developments. As such, the purpose of the meeting at Hope United Church on Monday, Sept. 23, was to gather community feedback on the developer’s application to amend the bylaw.

The approximately 80 residents listened intently to the details of the proposal, presented by Toronto City Planner, George Pantazis.

At question period, one local resident said that 200 signatures opposing the building height had been gathered and made an impassioned plea for the city decrease the height of the proposed towers, which was met by applause from the room.

After a series of heated exchanges from residents, Pantazis had to signal the crowd to let him respond to their concerns.

Pantazis explained that the proposed development fits within the provincial guidelines to intensify development in transit-rich areas like east Danforth, which is located within walking distance to the Main TTC subway and Danforth GO stations.

In response to the proximity of the development to residential housing, Pantazis explained that it falls within the City of Toronto’s Tall Building Guidelines, which takes into account the adverse impacts to light, view, privacy and wind in the surrounding neighbourhoods.

Another resident expressed concern about the density of the development and how it would impact traffic.

Steve Krossey, transportation consultant at the BA Group, a traffic consulting firm hired by the developer, explained that the firm conducted studies on the impact of existing traffic conditions while also considering rush hour traffic, impact on pick-up and drop-off areas, and pedestrian and cyclist safety.

He said that the results of the studies show that the influx of traffic would meet the accepted standards of impact.

When asked by a resident what he would do to mitigate the potential parking strain, Beaches-East York Councillor Brad Bradford said that he would consider barring residents in the new development from getting parking permits.

“We don’t want existing residents to have a disproportionate burden associated with parking challenges, especially when parking spots are available for residents in the buildings,” he said in a phone interview with Beach Metro News.

In the proposed plan, the Royal Canadian Legion Branch 11, currently located in the lot, will be torn down and rebuilt.

Jeff Paulin, president Branch 11, addressed the room in support of the development. “The legion is due for redesign and modernization […] and this developer is the best fit to take care of the modern veteran and new community groups in the area,” he said.

Paulin also reassured residents that the branch will not be torn down until funds are secured for rebuilding.

Residents still have a chance to have their say by contacting City Planner George Pantazis at george.pantazis@toronto.ca.

Residents can also attend the next community meeting for the Main Street Planning Study at Hope United Church on Monday, Oct. 7 from 7 p.m. to 9 p.m.