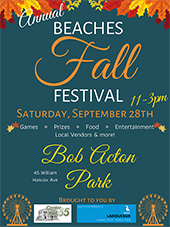 The Beaches Fall Festival is returning for its third consecutive year on Saturday, Sept. 28.

The festival began three years ago when the main sponsor Derek Ladoceur approached Community Centre 55 to host an event with the organization.

“My daughter was in a lot of programs that were there. Rather than just doing day camps, Centre 55 also works with a lot of families in need through their hamper Christmas program, or sponsoring kids for camp,” said Ladoceur.

All money raised from the festival after expenses will be put back into Community Centre 55 to continue their programs and work in the community.

Ladoceur said that the Fall Festival’s new attraction for this year is the beer garden. The festival will also feature a wood-burning pizza over, hot dog vendors, and live band JAK Trio.

“The band played at the first festival and they’re great. They’re generously donating their time to perform at the event,” he said.

There will also be lots of activities for kids, including a bouncy castle, face painting, crafts, and games.

The event also boasts raffles with over $1,000 worth of prizes, including some $50 gift cards donated by restaurants in the Beaches.

“I throw a lot of my own money into this because for me it’s a no brainer. I’m in a position now that I can kind of give back. I want to do it, and Centre 55 are the people to do it with,” he said.

Ladoceur said that there will also be a movie night in Bob Acton Park on the evening of Friday, Sept. 27 when the film The Goonies will be screened at 7:30 p.m. There will be popcorn and beverages available at the movie.

“It just seems to be getting bigger and bigger. The intention is to grow it every year, and to make this a truly annual event,” said Ladoceur.

Admission to both the Beaches Fall Festival and the movie night are free.

For more information about the festival and Community Centre 55, please visit https://www.centre55.com/event/beaches-fall-festival/