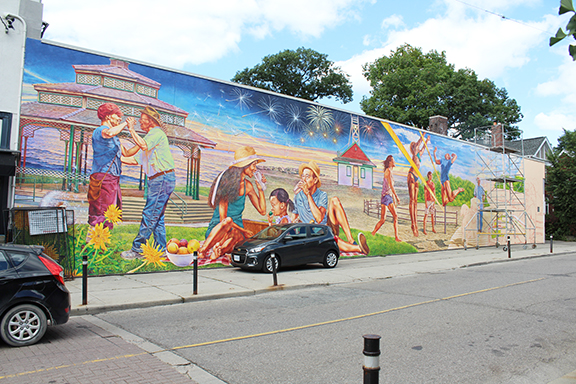 This photo from August shows work progressing on the east wall of the Beach Foodland store at Queen Street East and Lee Avenue. The completed mural will be officially unveiled during a ceremony set for noon today. Photo by Alan Shackleton.

The new Foodland Mural at Queen Street East and Lee Avenue in the Beach will be officially unveiled on Thursday, Sept. 26, at noon.

The mural was painted by artist John Kuna and was supported by the Beach Foodland store and parent company Sobeys, Mural Routes and the Beach Village BIA.

Located on the east wall of the store facing Lee, the new mural replaces an earlier work of art called Beach Got Rhythm that was painted by Rudolf Stussi and his son Errol in 2007. That mural had to be removed in November of 2018 due to cracks in the wall that had made it unsafe.

At the time of its removal, Foodland vowed to work with the community to replace it.

And that work comes to reality on Sept. 26 with Kuna’s mural being officially presented to the community.

The unveiling takes place at noon at the northwest corner of Queen and Lee. Attending the event to speak will be Kuna, Beach Foodland owner Nick Kyriacou. All local residents are invited to attend the unveiling and celebrate the new mural.

The design of the mural was subject to much public input and comment before a final design was agreed upon in June of this year.

Weather conditions put back the official unveiling until this week from what originally had hoped to be late July.

According to Mural Routes, the design of the mural uses a realistic scene approach.

“It references the Jazz Festival with the couple dancing in front of the Kew Gardens Gazebo where concerts are held, and the active lifestyle of residents and visitors who enjoy the beach, board walk and surrounding parks – from volleyball to dog walks, to picnics and ice cream breaks. Other landmarks are the Leuty Lifeguard Station and the boardwalk with a view of the Toronto skyline. Visitors to the mural can playfully pose and interact with the dandelion in the bottom-left of the mural, with its seeds blowing in the wind before transforming into the Victoria Day fireworks display over Ashbridges Bay,” said Mural Routes in a press release this week.