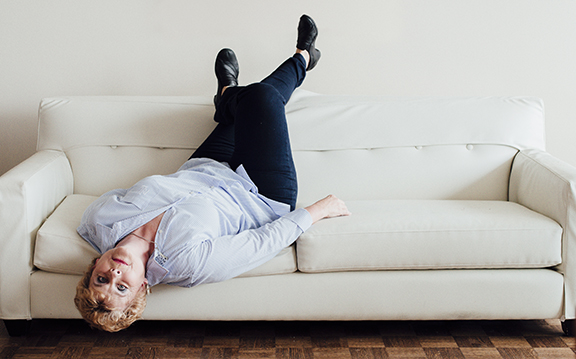 Kimmett is a veteran comic who is a regular on CBC’s The Debaters, and an alumna of The Second City.

Kimmett’s performance revolves around themes about aging as a woman. Kimmett shared a story about how she was given a seniors’ discount at a pharmacy when she was only 54 and was shocked she had received one on her bill.

“I do a whole routine on how — and anyone who is over 50 knows this — you’re being ghosted by most of society. Because as soon as you hit it, nobody sees you anymore in the same way. I’m saying this with my tongue in cheek of course,” said Kimmett.

She said that her routine also encompasses the advantages of aging, what people do with time now that they’re living longer, and a lot about having millennial children and trying to stay relevant at any age.

She said that Pollard’s blues singing helps to offset the rhythm of her comedy, like playing sultry music while Kimmett makes jokes about her body “falling apart.”

“She’s phenomenal. I really wanted a different sound for the audience that wasn’t just hearing my voice, and you’re getting humour and music together,” she said.

Kimmett said there is also an interactive portion of her show where the audience gets to pick what she does next out of four options.

Downward Facing Broad is also a fundraiser for Sistering, a multi-service agency for at-risk and socially isolated women. Along with other fundraising activities at the event, $5 from every ticket will go to Sistering.

“I have a big interest in trying to help women that are living in diminished ways. There’s a lot of supports in place. They’re (Sistering) is just a fantastic organization,” said Kimmett.

Downward Facing Broad aired earlier this year on CBC Radio, and is slated to be released by Howl and Roar Records on Oct. 9.

For more information about the show and to purchase tickets, please visit https://www.brownpapertickets.com/event/4299403