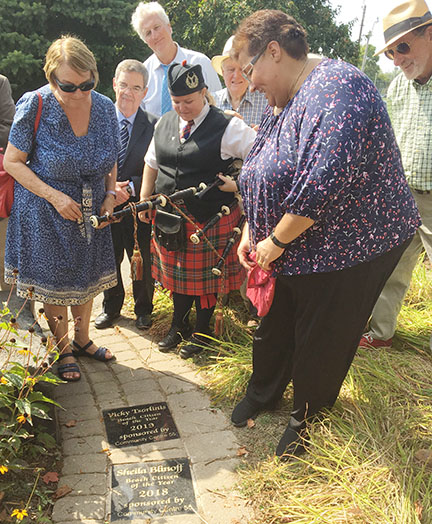 Vicky Tsorlinis, right, looks at the unveiling of her plaque as 2019 Beach Citizen of the Year at a ceremony on Saturday, Sept., 21, at the Millennium Garden in Woodbine Park. She is surrounded by a number of past Beach Citizens of the Year including 2018's Sheila Blinoff, left. Photo by Alan Shackleton.

Vicky Tsorlinis was officially declared the 2019 Beach Citizen of the Year at special ceremony in the Millennium Garden of Woodbine Park on the afternoon of Saturday, Sept. 21.

Tsorlinis was honoured with the presentation of a number of bouquets of flowers, certificates from all three levels of government and the unveiling of the plaque with her name on it in the Millennium Garden’s Walk of Fame.

She becomes the 19th person to be honoured as a Beach Citizen of the Year. First presented in 2001, the award is an initiative of Community Centre 55, the Toronto Beaches Lions Club and Beach Metro News.

Saturday’s event was attended by many of the past recipients of the award, and was hosted by 2018 Beach Citizen of the Year Sheila Blinoff.

“The award goes to a local person who exemplifies a sustained devotion for the well-being of others and is strictly for those doing this as volunteer work, not as part of their paying job,” Blinoff told the large crowd gathered in the Millennium Garden on a beautiful, sunny afternoon on the last Saturday of this summer.

Tsorlinis was honoured for the vast amount of volunteer work she has done in aid of numerous local organizations over the past 20 years.

Roushias said he remembered meeting Tsorlinis back in 1982 at the Frankland Community Centre, and even then it was obvious to him that she was someone “special”

“I knew this lady had something special. She was able to connect with so many people of different backgrounds, cultures and nationalities,” he said.

He also made mention of her musical tastes which opened his eyes up to artists such as the Tom Tom Club and Afrika Bambaataa. He met her again when they taught a step dance class at Adam Beck school, and he was again impressed by her energy and enthusiasm.

“Everybody was energized by her enthusiasm; it was all perspiration and inspiration,” Roushias remembered.

Sharpe worked with Tsorlinis for 10 years on the Malvern Collegiate Parent Council, and praised her fundraising efforts for the school and in particular the creation of scholarships and awards to go towards students who had achieved academically.

“She saw a need for funding and made it happen,” Sharpe said of Tsorlinis.

Sharpe pointed out that in those 10 years approximately $100,000 was raised for Malvern through the efforts and leadership of Tsorlinis.

“If you ask Vicky for help, she’s going to give it to you. She is constantly working for other people, and I’m proud to call her a dear friend,” said Sharpe.

Her main fundraising efforts at the moment are through craft fairs and book sales.

In her acceptance speech on Saturday, Tsorlinis said she does not do her volunteer work to gain praise or personal honours but to help out where she sees a need.

“I much prefer to remain anonymous,” she said, adding she was extremely honoured to have her name join those of other Beach Citizens of the Year.

After seeing the impact she could have at Malvern C.I., she realized she was good at raising funds for organizations in need and that she did not mind putting in the long volunteer hours despite her full-time job as managing a downtown dental office.

“My desire to give back grew, especially after I volunteered with a palliative care group,” Tsorlinis said.

She added, though, that volunteering does come with “personal sacrifices” but in the end they are worth it.

“This is where I am and this is where I belong,” Tsorlinis said of the volunteer work she does and the benefits her fundraising brings to the community.