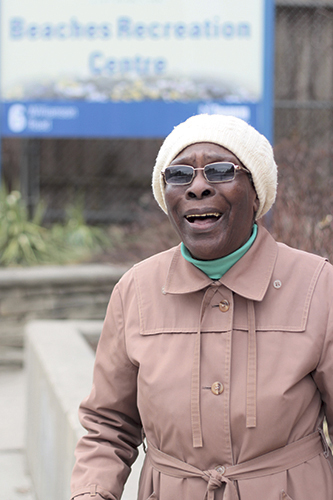 Yvonne Walmsley is being remembered for her smile, her laugh and her friendliness.

Yvonne Walmsley is being remembered not only for her dedication to the Beach community and the physical fitness of its residents, but also for her genuine interest in the wellbeing of others.

Walmsley died at the age of 91 at her Brookmount Road home on July 27 of this year.

“So many people were at her memorial at Calvary Baptist Church,” said her daughter Denise Matthews in a recent interview with Beach Metro News.
“So many people knew her because she would say hi to everyone and that was why she had so many friends.”

For years, Walmsley played a key role in supporting the Beaches Recreation Centre and one of its major fundraising events, the Spring Sprint.

Even at the age of 86, she was still taking part in the Spring Sprint – earning honours for being the oldest participant in the event.

Matthews said her mother always loved to walk and also promoted and lived a healthy lifestyle.

“We walked everywhere when I was a kid,” Matthews remembered. “We’d walk across the city literally. I’d cycle that distance now, but we walked it.”

Walmsley lived most of her life in the Brookmount Road home in the Beach Triangle which her own mother Susan Matthews purchased in 1953.

Working as a nurse’s aide at a number of downtown hospitals, Walmsley would wake up early and walk from her home to the hospitals she worked at over the years including Wellesley, Women’s College and Toronto General.

“She was a very spiritual woman and exercise cleared her mind, and she loved to walk. She felt people should enjoy exercising and not have disgruntled looks on their faces while they were doing it,” said Matthews.

She added that while her mother supported the Beaches Recreation Centre by collecting donations and working on the Spring Sprint, the centre also provided an important part of her mother’s own social life.

“She would walk to the recreation centre no matter what the weather, and she’d always bring her bundle buggy in case she had to shop,” said Matthews.

“She spent so much time talking to people in the community, and people were telling me so many things about her at the memorial.”

Beach historian Gene Domagala considered Walmsley a true friend, and he also agreed that she was a person who was always interested in other people and how they were doing.

“She was a lady with the best smile you ever saw. She spoke to everybody and she was always so nice and asking how you were,” he remembered.

In 2007, Walmsley was nominated as Beach Woman of Distinction for her work with the Beaches Recreation Centre.

In a 2014 Beach Metro News story by Andrew Hudson, Walmsley talked a bit about her involvement with the Beach Recreation Centre, and the Spring Sprint and how proud she was to take part in it and to see it grow from a small event in the 1980s to one which now attracts hundreds of runners.

She also acknowledged that she did indeed enjoy talking to people.

“When my class is over, they laugh at me because I sometimes see people on the street coming and going and they say, ‘Yvonne, you’re still here!” she said in the 2014 interview.

“I’m not in any hurry. I always take my time because I talk to everybody.”

Walmsley said in the story that a positive attitude was key to good health and happiness.