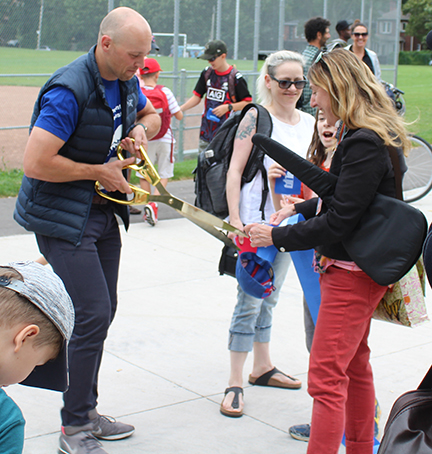 Beaches-East York Councillor Brad Bradford cuts the ribbon to open the new playground at Fairmount Park on Tuesday, Sept. 3. Inset photo shows the pizza oven that was recently installed in the park. Photos by Alan Shackleton.

A double celebration took place on Tuesday afternoon at Fairmount Park to officially celebrate the opening of the new playground and the arrival of a pizza oven.

Beaches-East York Councillor Brad Bradford was on hand for the celebration which featured a ribbon cutting at the site of the playground at the northeast end of the park, which is located behind Bowmore Road Junior and Senior Public School, in the Gerrard Street East and Bowmore Road area.

“This park is a real centre of the community, and the playground was one of the things identified by young people as a need during community consultations in 2018,” said Bradford at the Sept. 3 celebration.

He credited former Beaches-East York Councillor Mary-Margaret McMahon with getting the work done to have the new playground created. “Councillor McMahon did all the heavy lifting on this one,” said Bradford, who was elected councillor in October of 2018.

Approximately $70,000 of city funding was put into the equipment and landscaping for the playground, and those funds come from Section 42 money (which is funding from developers dedicated specifically to parks and parkland in the city).

The playground celebration saw scores of children playing as it also marked dismissal time for the first day of school at Bowmore.

Bradford said the pizza oven is also a great addition to Fairmount Park. The oven set up in the southwest corner of the park is the one that used to be in Christie Pits, and Fairmount is one of only three Toronto parks to have one.

“It was a huge community effort to get it here from Christie Pits. The residents and the Icemasters (community members who build outdoor ice rinks at Fairmount Park every winter) took the lead, and it’s going to be great getting pizza made in this oven.”

The oven is still not officially open as it has to get a few safety permissions before it can be fired up and park users can start making their own pizza in it.

Toronto’s other parks with pizza ovens are Sorauren Park and Christie Pits. A number of other city parks have bake ovens, which are similar, but they are not specific pizza ovens.