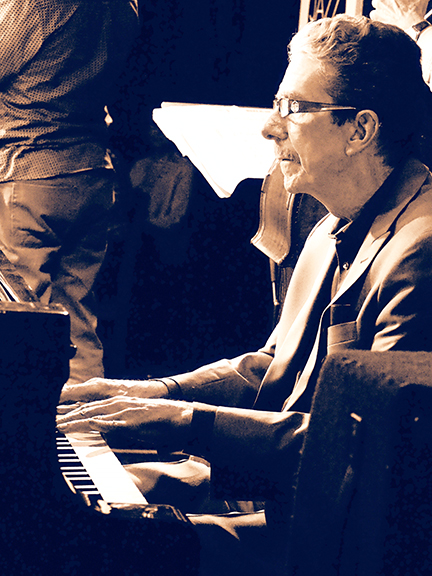 Gary Williamson played jazz with the top musicians and at the top venues in Toronto and around the world. Photo: Submitted.

Gary Williamson was born in Toronto, raised in his family home on Frenchman’s Bay and the Wheeler Avenue home of his grandmother Doss, who gave him his first lessons on the piano.

He was identified as having perfect pitch at the age of four when he began his piano studies under Miss Birch, a Beaches piano teacher.

At the age of 12, he performed a solo piano recital at the Royal Conservatory of music. He was also “gifted” academically and was in an accelerated class at Williamson Road and entered Malvern Collegiate at a younger age than many of his peers.

He took extra classes at Malvern, studying Russian, while excelling at maths and science, continuing with his piano studies at the Conservatory, and playing piano in the Malvern Dance Band under the tutelage of George McRae.

After graduation, he was accepted into Engineering at U of T. However, his heart was not in his studies there. He continued to play in jazz bands on weekends and travelled north to play at resorts such as the Muskoka Sands in the summer.

After his second year he withdrew from university and focused on his music.

He began playing professionally in 1964. At that time he began studies in harmony and arranging with Gordon Delamont in Toronto.

In 1968 he took a freighter from San Francisco to Yokohama with his friend Gary Morgan. When his money ran out he connected with another piano player who had too many gigs and asked Gary to fill in.

He met the love of his life, Rose, while living in Tokyo. Gary performed with many bands, travelling throughout Asia to Korea, Thailand, Viet Nam and Hong Kong and finally to Hawaii from 1968 to 1972. While other band members would go back to their home base in Tokyo after a gig, Gary, and later he and Rose, would stay on and immerse themselves in the culture and explore.

Rose and Gary married in 1973, then settled on Normandy Boulevard in 1976. There, they cultivated their garden and raised their two children, Tai and Sue May.

Gary dedicated himself to music and had a very successful career recording, touring and performing with many jazz greats.

He worked with almost everyone in the Toronto jazz scene and backed visiting “greats” in the various leading clubs. He performed frequently at Bourbon Street, in its heyday, performing with legendary jazz figures including Junior Cook, Thad Jones and Dexter Gordon.

He played and toured with ‘Nimmons N Nine Plus Six’ and recorded with everyone from Phil Nimmons, and Ed Bickert to Katherine Moses, Charlie Gray, Sam Noto and Hagood Hardy.

He travelled with the Dave McMurdo Jazz Orchestra to the Soviet Union in 1991 just prior to the political upheaval.

He played at Toronto’s famed George’s Spaghetti House in the 1970s and later at the Senator, Montreal Bistro, “The Rex”, as well as Koerner Hall. Gary performed at 14 separate Sound of Toronto Jazz concerts at the Ontario Science Centre from 1977 to 1997, once as a solo pianist (on March 7, 1983).

He was also a dedicated educator who enjoyed teaching the next generation of musicians at the Etobicoke Board of Education and the Jazz Studies Faculty at the University of Toronto. He also taught at the Banff School of Fine Arts, a Humber College Music Camp, ‘Chamber Music and All that Jazz’ at the University of New Brunswick, and the U of T’s Big Band Workshops.

He enjoyed a quiet retirement at home and spent his time doing crossword puzzles, perfecting his favourite recipes, gardening, reading and studying the works of Bill Evans, Chopin and Duke Ellington.

Gary successfully battled throat cancer in 2014. When it was again diagnosed in 2018 he was less fortunate.

Gary was fully engaged in his treatment. When offered chemo, he asked about the side affects and was told it could affect his hearing and sensation in his fingertips. He quickly told the doctors to come up with something else. “I play the piano. That’s what I do. I don’t want to lose that.”

And they did find another treatment. And he continued to play at home and even with his friends who came to jam with him when he was very ill.