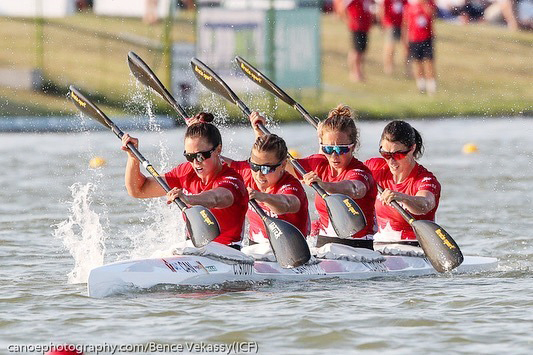 Canada and the Balmy Beach Club had a great showing recently at the 2019 ICF Canoe Sprint and Paracanoe World Championships.

Top athletes from around the globe travelled to Szeged, Hungary, looking to qualify for the 2020 Olympics.

Three paddlers from the Balmy Beach Club qualified their boats for Tokyo in 2020. Here’s a round-up of results from the top Balmy Beach participants:
Nicholas Matveev was a member of the Canadian K4 (kayak, four-person) crew that earned an Olympic berth.

On the women’s side, Courtney Stott was a member of the K4 crew that also secured a spot at the Olympics. She also came in fourth in the K2 500m B division final.

Andrea Nelson qualified for the Paralympic Games in Tokyo in the paracanoe KL2 200m.

Erica Scarff who competed in the Rio Paralympic Games, came in third in the B final in KL3 200m.

“This was the most anticipated event of the season and the competition was extremely tough,” said Eleanor McIntyre, Commodore at the Balmy Beach Club.

“We had the greatest representation of athletes earning Olympic berths than any other club in the country. We could not be more proud!”

The competition was held in Hungary from Aug. 21 to 25.