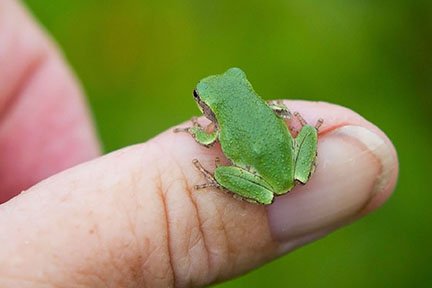 Here’s a quick story about a little animal we often hear, but rarely see.

One day, while I was looking for shorebirds and herons, I saw a beautiful plant, who’s name I couldn’t tell you for the life of me, which caught my attention and brought me over to it for a closer inspection. These random decisions sometimes account for the greatest of my animal sighting surprises.

I was taking a picture of one of the plant’s yellow flowers, when the slightest of movements on one of its leaves caught my attention.

I looked at the leaf, but honestly couldn’t see anything. Then there was another slight movement and a green tree frog, about the size my baby finger nail, materialized before me.

As I leaned in for a closer look I realized there wasn’t one, but three on the leaf! It’s amazing that I was literally inches away from them and yet still couldn’t see them until they moved.

I tried to take some pictures, but they were so small I had to switch to my cell phone. So, what were these little cuties? Gray treefrogs (Hyla versicolor).

These little guys don’t get bigger than six centimetres and come in green, brown, and grey colour variations. Like most treefrog species, they have suction cups on their feet which allow them to stick to almost any surface.

While watching, they jumped easily from leaf to leaf and within a few minutes of first seeing them, all three were gone. Now, they probably hadn’t gone far, but once I took my eye off one it was almost impossible to find it again.

Some more cool facts about gray treefrogs: They have the chameleon-like ability to change colour. They are rarely seen except during breeding season. Tadpoles turn into froglets in six to eight weeks. During hibernation, 80 per cent of their body freezes and their breathing and heartbeat is suspended. They have a life span of eight years. Their call, a fluttering trill, is what I’m guessing you’ve heard dozens and dozens of times, you just didn’t know you were listening to a frog!

Over the next month you will start to see butterflies, dragonflies and birds of prey migrating.