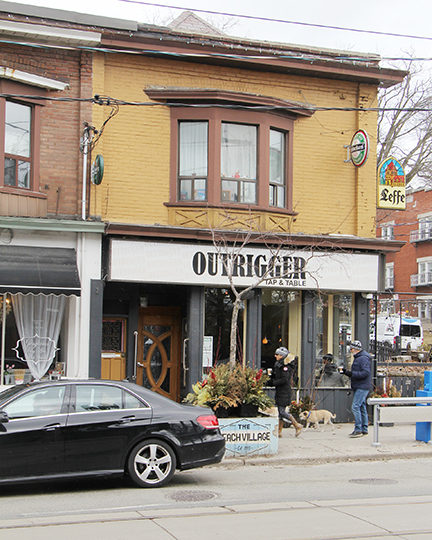 Reader Mary Lawlor wrote in to let us know about the help she recently received from Outrigger restaurant on Queen Street East. Photo by David Van Dyke.

I had an uplifting experience in the Beach recently, and I wanted to share it with Beach Metro News readers.

The story is as follows:

On Friday June 7, I was going to meet with my brothers (Tom and Fred) to celebrate my birthday over breakfast at the Outrigger at Queen and Beech.

My brother Fred called us at 9 a.m. to say that he was at the restaurant and it didn’t open until 11 a.m. We decided to go to The Beacher Cafe instead and told Fred to meet us there. He arrived 10 minutes later in a terrible state.

While he was making the call to us he put a bag with my birthday gift down on top of the Toronto Star newspaper box outside the Outrigger restaurant and when he went to get it, it was gone. He was leaving for Nova Scotia for an extended stay the next day and he wanted me to have something nice.

When we finished our meal, I went to the Outrigger and asked them if anyone had by chance found the bag and left it with them. They were very sympathetic but no one had seen the bag. It was still early, 10.30 a.m., and I left my name and number just in case.

Really, though, I felt like there wasn’t much hope of getting it back. As we were crossing the street, Vince D’Cruz the owner, ran over and said “We have video cameras around the restaurant, I will check them and let you know if we see anything”.

Thirty minutes later he called to say he had footage of a girl taking the bag from on top of the newspaper box while my brother had his back to her. He said he would ask some of the people in the area if they knew her.

An hour later he phoned to say that he and his son Eddy has gone and talked to some of the local residents. No one had seen the girl but they said they would get the word out.

Much to Vince’s surprise, an hour later a longtime customer came in with the bag. She said that someone had left it outside her door and she heard that he was looking for it.

I was incredulous and thrilled when Vince called to say that he had the gift. I was also astounded that a busy restaurateur would care enough to take time out of his day to see if he could help.

The story doesn’t end there. That night my husband and I went to have supper at the restaurant and pick up the gift.

Vince had told me to ask for his son Eddy. We did so after our meal. Eddy showed us the footage from the morning and gave me my gift. I was so happy but also upset because the most important thing to me was the card that my brother Fred had written to me and it was missing.

Eddy saw my disappointment and offered to help us look on the street on the off chance that the card has been tossed on the sidewalk or in a dumpster. We made a strange sight. Two men in business attire and a middle-aged woman going through garbage cans on the street.

This was when the next incredible thing happened. As I was opening the dumpster at the restaurant, a young man sitting on the side asked, “What are you looking for?”

I was reluctant to tell him but he insisted and then he said, “We have a stick for the garbage.” Where upon he hopped up and started to root through the dumpster.

“I don’t think we have put out any garbage yet today,” he said from the middle of rotting garbage bags. His name was Patrick and he worked for the restaurant. I was blown away by his attitude and willingness to help.

Eddy came around the corner saw what he was doing and said, “Oh good, Patrick you’re helping them.”

We went inside to pay our bill and Eddy refused to accept payment. He said, “ You’ve had a rough day, dinner is on us.”

The card never showed up but I got a priceless gift from Vince, Eddy and Patrick. The gift of kindness, a renewed belief in the goodness of people and an appreciation of the community in the Beach and how they look out not just for themselves but for others. It is indeed a rare thing.