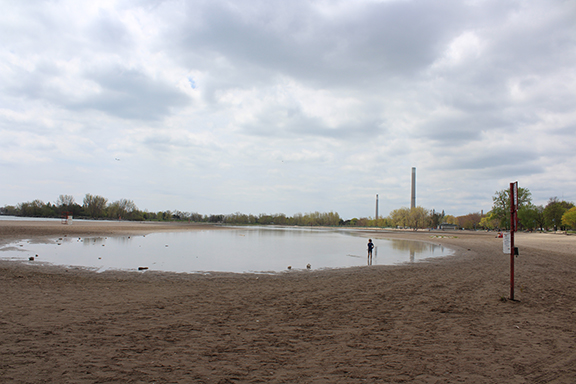 The pond on Woodbine Beach last month which was caused by high water levels in Lake Ontario, rainy weather and strong winds.

Many Beachers think that they are having problems with the wind, the water, the storms, the sand, uprooted trees, climate change and issues all around the eastern Beach.

Let me give you a little lesson in the climate area in the Beach – history is the teacher!

The present Boardwalk as we know it nowadays was originally a long, gigantic sandbar stretching from the Scarborough Bluffs to our present Toronto islands.

To the north of this ‘sandbar’ was a body of water which was Toronto Bay on the west side near Bathurst Street until approximately the present Parliament Street in the east. From that point there was a body of water south of Eastern Avenue  and Queen Street going eastward from Parliament to our present day Maclean Avenue. It was called Ashbridges Bay, a giant water swamp.

Imagine this body of water a couple of hundred years ago, just a water wasteland.

Later, people started moving in like the Ashbridges family, and the Williams, and they started building the area up.

Cottages appeared on this sandbar in the late 1800s and early 1900s. Remember, the people were at the mercy of the weather on this sandbar. At that time there was no protection from the elements.

Over the next 50 years, Ashbridges Bay was filled in with 60-foot logs to stabilize the bottom, water was taken out and construction material and landfill garbage was put into it until it was nearly able to be built upon for residential and commercial properties.

But, there were hundreds of cottages built over the sandbar where the present Boardwalk is from Victoria Park Avenue in the east to the Toronto islands in the west, and these cottages were at the mercy of the elements.

These homes were sometimes very flimsy, while in other cases they were solid brick houses. But they were all without any protection from rain, sleet, hurricanes, current changes, tides, undertows etc…

These houses had water lots extending out into Lake Ontario, but no protection against the ravages of the water.

When a storm came down on the hapless cottages, dozens of these homes and their boat houses were often taken out into the lake. At their own peril, Beachers tried to bring their cottages back.

There are articles written about the water levels going up hundreds of feet on streets such as Lee Avenue, Kenilworth Avenue, Waverly Road and Maclean Avenue – wreaking havoc upon anything in the way.

When storms hit the main streets of Queen and Maclean, there were reports of up to four-to-five-foot deep pools of water for several hundred feet. This was a disaster for the residents.

In those days, Kenilworth and Kippendavie were flooded for days. The water again up to four or five feet deep. There were no streetcars or vehicles that could go through.

When a rainstorm came, streets near the present Norway and Lee area were flooded up to seven feet deep, causing devastation to the houses.

Lightning storms would hit churches, such as the old Bellefair United, damaging the steeple. The Kew Gardens area was also flooded.

Storms in those days were horrific. Granted, there were a great number of years where the unrelenting winds and rain abated, but when they came back disaster struck.

For example, near Fallingbrook Road and Queen one year the storms wiped out the cliffs at the bottom of the road and sent the land into the lake.

It was turmoil after turmoil. The people who owned these cottages tried their best to stave off these hurricane-like storms, but it was to no avail.

There are hundreds of photos over the years of ruination in the Beach area, with people trying to save their property and belongings in those days from the 1880s to the 1920s.

Finally, common sense prevailed and the government took over. They destroyed most of the cottages and stabilized the waterfront in the 1930s.

It is very hard for me to write about the misery brought about by these violent storms, having read and researched the hundreds of articles written on this subject.

To see pictures of homes floating in the lake, people looking for their belongings, boats and debris piled on the sand. What a tragic sight.

There have been many boats and ships that have sunk in the area, and a lot of them have not been found.

Since those days, different government agencies have installed groynes (concrete triangles to help stop waves); and filled in the lake several hundred feet south to stop any natural intrusion.

However, many Beachers will recall that there were still many storms that wreaked havoc on the area in later years.

In 1953, the Kew Beach Boat House and the Leuty Lifeguard Station were the victims of one of these violent storms. The boat house was hoisted above the Boardwalk where it remains today, and the lifeguard station was moved out of danger (we believe).

Years later, storms again hit the eastern Beaches and the boardwalk was destroyed in several places.

However, the storms that once took place were much worse in their impact than what we have today because of modern technology.

Let us hope that tragedy will not strike again. To write a full account of the different storms, hurricanes etc…would take dozens of pages, which I might one day write about. Please share any comments with me.