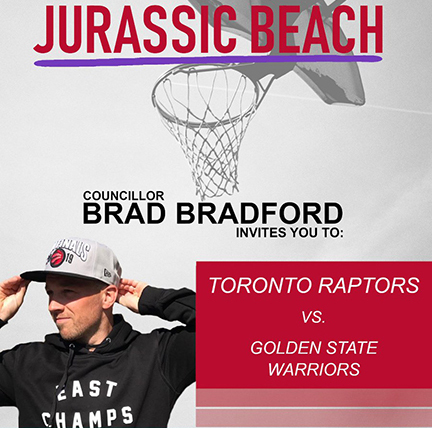 Jurassic Beach, hosted by Beaches-East York Councillor Brad Bradford with the support of The Beach Village BIA and The Richards Group, will take place tonight indoors at the Alliance Cinemas - The Beach.

Jurassic Beach is on tonight (Thursday, June 13) for East Toronto residents looking to gather together to watch the Toronto Raptors as they attempt to win the NBA Championship.

The Raptors lead the best-of-seven championship series 3-2 over the Golden State Warriors and a win tonight in Game 6 in California would give Toronto its first ever NBA Championship.

Due to the rainy weather conditions, tonight’s free event has moved indoors to the Alliance Cinemas – The Beach at 1651 Queen St. E.

This is the third Jurassic Beach event to be hosted by Beaches-East York Councillor Brad Bradford with the support of The Beach Village BIA and The Richards Group during the NBA finals.

The first one was held outdoors in Woodbine Park on the night of Friday, June 7, for Game 4 and the weather could not have been better. The game was also won 105-92 by the Raptors, giving them a 3-1 lead in the series, to make it a perfect night all around.

Sadly, the weather did not co-operate for Monday night’s Game 5 on June 10, which saw the Raptors fall by one-point (106-105) to the Warriors. The rainy conditions forced a move to the Alliance Cinemas from Woodbine Park in advance of that game’s 9 p.m. start.

The viewing party at Alliance Cinemas – The Beach will see the doors to the theatre where the game is being shown open at 8:20 p.m.

Those wishing to attend will be able to pick up tickets in advance starting at 6 p.m.

The theatre where the game is being shown holds approximately 200 people and Monday’s game saw a full house, so those who want to attend tonight are advised to pick up their tickets early.