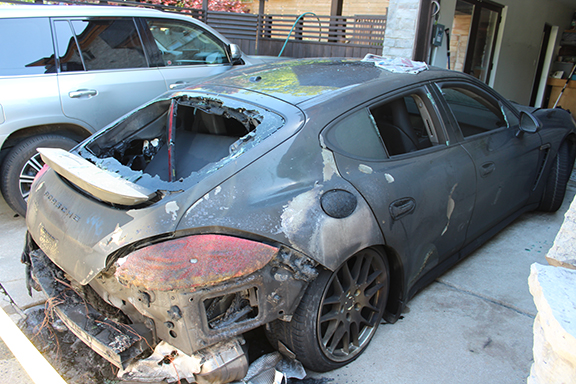 This Porsche Panamera sedan was burned in the driveway of Glen Ames home early this Friday, June 7, morning. The fire is considered suspicious and is under investigation. Photo by Alan Shackleton.

A fire which severely damaged a Porsche parked in a Beach driveway early Friday morning is considered suspicious.

Toronto Fire was called to a home at the northeast corner of Glen Ames and Long Crescent at approximately 12:41 a.m. on June 7 for reports of a fire.

When fire crews arrived they found a Porsche Panamera sedan in the driveway fully engulfed in flames.

Firefighters extinguished the blaze and then checked the house to make sure the fire had not spread.

According to Toronto Fire, some smoke had seeped into the home’s basement and it was vented by fire crews on the scene. Firefighters also checked the house with thermal imaging cameras and deemed it safe.

No one was injured in the fire.

However, fire crews at the scene deemed it suspicious and handed it over to Toronto Fire investigators and Toronto police to look into.

At this point, that investigation has not revealed a cause for the car fire.

Neighbour Claire Fortier awoke to the sound of firefighters battling the blaze across the street from her Long Crescent home.

“I woke up and all I saw was the fire engines,” she said. “There were a lot of police cars and fire trucks.”

Toronto Fire would not speculate on whether the car fire in the Beach was connected to two other incidents early Friday morning in which vehicles were burned under suspicious circumstances.

In one of the other fires, five vehicles were damaged in a fire at approximately 1:45 a.m. on Sinnott Road in the Eglinton Avenue and Birchmount Road area. In the other fire, which occurred at about 2:30 a.m., a tow truck parked behind on apartment building on Bellamy Road near Eglinton and Birchmount was burned.