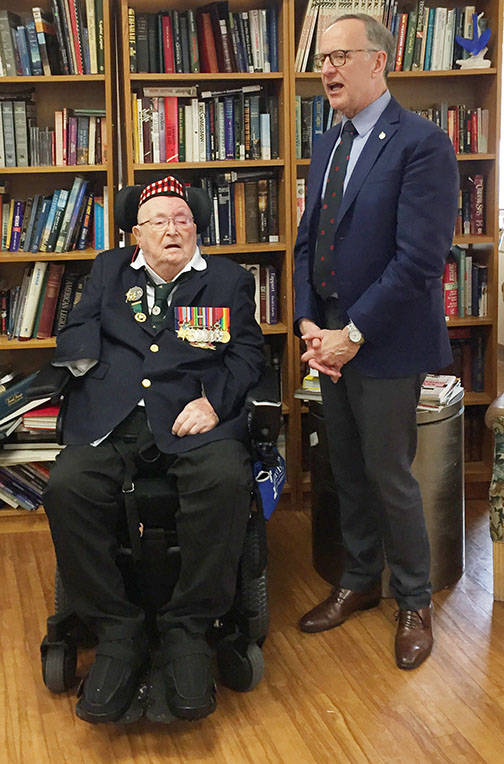 William Allan Bacon, known to all as Bubba, was presented with a Member of Parliament's Citizenship Award from Don Valley West MP Rob Oliphant recently at Sunnybrook Veterans Centre. Bacon took part in the D-Day landing at Juno Beach by Canadian troops on June 6, 1944. Photo by Ricardo Vigliano.

It’s not every day that one has the opportunity to meet with history in person. Yet that’s what literally happened on Friday, May 31 at the Sunnybrook Veterans Centre, Canada’s largest veterans’ care facility and home of one of Canada’s last living war heroes.

There, surrounded by family, friends, and dedicated health professionals, 99-year-old William Allan Bacon, known to all as Bubba, personified a remarkable chapter of Canada’s war history and is a living reminder that Thursday, June 6, is the 75th anniversary of D-Day.

At last Friday’s  event, Bacon’s bravery and patriotism were recognized once again as he was honored with The Member of Parliament’s Citizenship Award presented by Robert Oliphant, MP for Don Valley West.

Weakened by his lifelong journey, Bubba barely spoke at the event, but his meaningful war story speaks for itself.

Bubba was among the thousands of young Canadians who landed on Juno Beach in Normandy on D-Day, 75 years ago. He grew up in Toronto’s east end and attended high school at Danforth Tech.

Like others, he was looking for adventure when he enlisted in the military, but shortly thereafter he was putting his life on the line to write Canada’s name in the memorable victory of the Allies over Nazism. His service was halted on June 17 when a grenade he was disarming went off. He lost his right arm but survived to tell his story.

“Those who came back with injuries have taught us what health is, what recovery is, what dignity is, and what service is,” Oliphant said at the presentation of the Citizenship Award.

Joined by Dr. Jocelyn Charles, the Medical Director of the Veterans Centre at Sunnybrook, the Oliphant also recognized Bubba’s work for The War Amps, an organization which he praised for managing to have “reinvented itself as it continues to help veterans, but other people as well.”

As a member of The War Amps, which was started by amputee veterans returning from the First World War, Bubba and others continued providing exemplary service to Canada by helping victims of amputation to move on and to adapt to the new reality as he did.

Asked if he would like to offer a message for young generations, Bubba, with the help of his grandson Ryan Melnik, said “live life carpe diem”, citing a Latin expression used to encourage someone to make the most of the present rather than dwelling on the future.